Sunday, May 22
You are at:Home»News»Sarawak»S’wak to bank on culture, eco-tourism 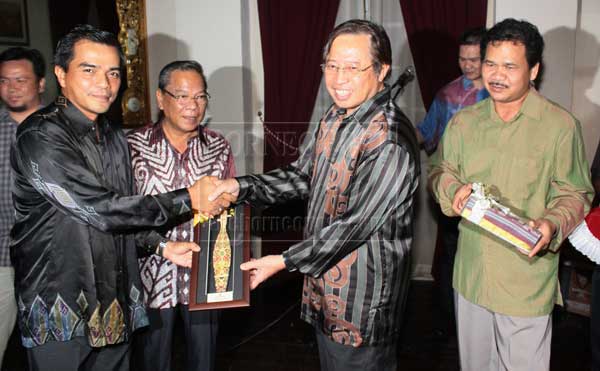 THANKS A LOT: Abang Johari (second right) presenting a memento to Johanif as a token of appreciation for his contributions to Sarawak.

KUCHING: The Ministry of Tourism will continue to highlight Sarawak’s unique culture and eco-tourism products during Visit Sarawak Year which will stretch from July 2013 till June 2014.

The Ministry will also be setting into motion several initiatives together with other major stakeholders to woo more quality tourists.

Among these initiatives are selling handicrafts at shopping centres in Kuching, said its minister Datuk Amar Abang Johari Tun Openg.

“Kuching now boasts several new shopping centres for tourists. This is to provide tourists a place to do their shopping. Handicrafts will also be made available at these shopping malls,” he said during a farewell dinner for outgoing Tourism Malaysia (Sarawak) director Johanif Ali on Saturday.

Touching on attractions in Kuching, he said among the infrastructure highlights would be the proposed pedestrian bridge across Sungai Sarawak which is expected to be completed by 2014.

“This will complete and complement the heritage trial within Kuching city centre.”

He added that several fringe events would also be held to complement the annual Rainforest World Music Festival in Santubong.

On Johanif, Abang Johari hoped that he would continue to promote Sarawak in his new posting in New York.

“On behalf of the state government, I would like to give my thanks to Johanif for his contributions to Sarawak in the past four years.”

Johanif, in his speech, said the relationship between Tourism Malaysia and the state government had been very instrumental.

“I hope this relationship will continue and further strengthen,” said Johanif, who will be succeeded by Salehuddin Ariffin, who is currently Malaysia Tourism New York office director.