Thursday, January 21
You are at:Home»News»Sarawak»‘Kanang’s heroic acts to be immortalised’ 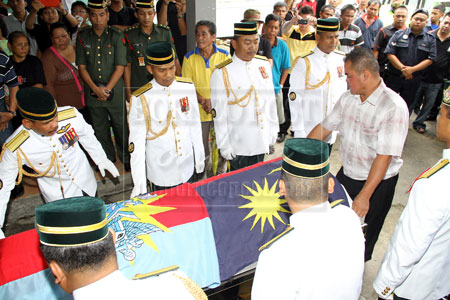 FULL HONOUR: The body of Kanang is transferred to Kem Bukavu in Penrissen from the Sarawak General Hospital’s morgue. — Photo by Chimon Upon

KUCHING: The heroic acts of the late Temenggong Datuk Kanang Langkau will be immortalised as the nation’s symbol for valour and unity.

Kanang, who played an instrumental role in bringing down the communist insurgency, is only among a few individuals who was conferred the Seri Pahlawan Gagah Perkasa (SP) and Pingat Gagah Berani (PGB) awards.

“Kanang should become an idol and a source of motivation to the younger generation,” said Defence Minister Datuk Dr Ahmad Zahid Hamidi, who paid his last respects to Kanang at the Sarawak General Hospital’s morgue yesterday.

“This is to boost their spirits as well as to give them (trainees) motivation.”

He added that Najib had given his orders for Kanang, who died suddenly at his home here on Thursday morning apparently due to a heart attack, to be given a full military funeral service.

“This is to show the appreciation of the federal government to Kanang for his contributions to the country,” said Ahmad Zahid, who also
said that donations by the Malaysian Army (ATM) would be given to the family.

Meanwhile, Ahmad Zahid said the movie titled ‘Kanang Anak Langkau’, which is expected to be premiered on Sept 16 in conjunction with Malaysia Day and ATM Day, would have to revert to the drawing board.

“I have seen the script but with Kanang’s untimely demise we will have to take a relook at the script which he (Kanang) was directly involved.”

He added that filming of the movie would take place next month and required three to four months to complete.

The person who would be acting as Kanang, said Ahmad Zahid, would depend on the film producers.

Yesterday, the body of the late Kanang was brought to Kem Bukavu in Penrissen at 2pm for close relatives and friends to perform prayers and a miring ceremony.

Today, the cortege will be brought to the Civic Centre here for VVIPs, VIP and the public to pay their last respects from 9am
to noon and from 2pm to 5pm.

It will be from 9am to noon tomorrow.

The church service will be held at St Thomas Cathedral tomorrow at 1pm before being laid to rest at the Heroes Grave at Taman Budaya at 3pm.