Friday, January 21
You are at:Home»News»Sarawak»Farewell to a true soldier *more photos updated 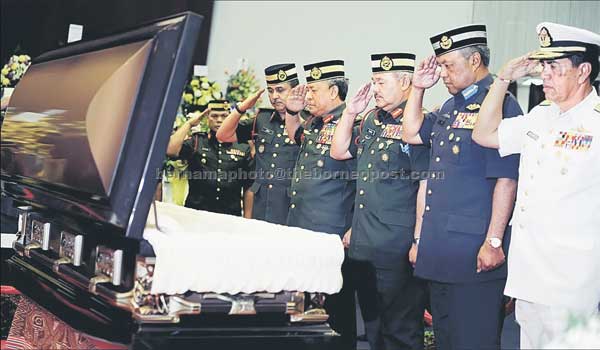 KUCHING: Temenggong Datuk Kanang Langkau, the nation’s most decorated war hero, was laid to rest at 4pm in full military honour yesterday at the Heroes’ Grave in Jalan Budaya here.

The casket bearing the last surviving recipient of the (SP), the nation’s highest gallantry medal, was draped in the Jalur Gemilang and Malaysian Armed Forces fl ag and brought to the burial ground by eight pall-bearers made up of first warrant officers (PWI) representing the three services in the Malaysian Armed Forces at 3.25pm after the funeral service at St Thomas Cathedral which started at 2pm.

The burial ceremony started at 3.30pm with Jabu, Chin, Zulkifeli and senior army dignitaries paying their last respects to Kanang.

Reverend Father Michael Buma Galami performed the last rite in the Iban language before the casket was lowered down at 3.45pm.

Although there was a slight drizzle, the funeral ceremony went on smoothly and peacefully.

Brawang then led family member s in paying their last respects to the national hero before Jabu led other dignitaries in the laying of wreath ceremony. 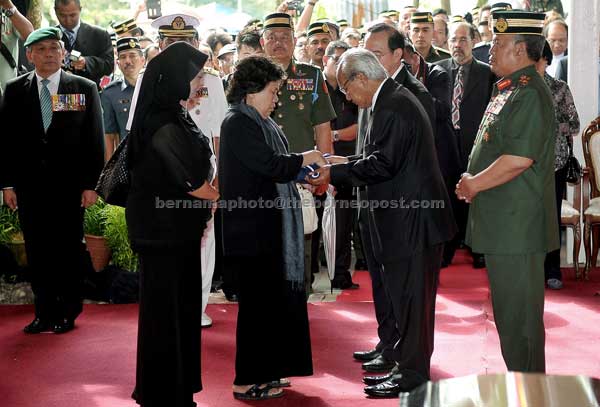 NATIONAL HERO: Jabu presenting the Jalur Gemilang which was used to drape over the casket to Brawang at the ceremony at the Heroes Grave. — Bernama photo.

Kanang, 68, died suddenly last Thursday morning when he collapsed while watching television at his home at Sg Apong here, shortly after complaining of chest pains. An ambulance rushed him to the Sarawak General Hospital but he was  pronounced dead at around 1.45am.

He was a retired Warrant Officer One (WO1) and among the very few people to be conferred the SP and PGB gallantry awards while still alive.

He had served in the Eighth Royal Ranger Regiment until his retirement in 1983 after serving in the military for 21 years.

Kanang was honoured for his bravery during an encounter with communist insurgents at Tanah Hitam in Perak in early 1980 during which he was shot three times. Five insurgents and a soldier were killed while another was seriously injured in the battle. 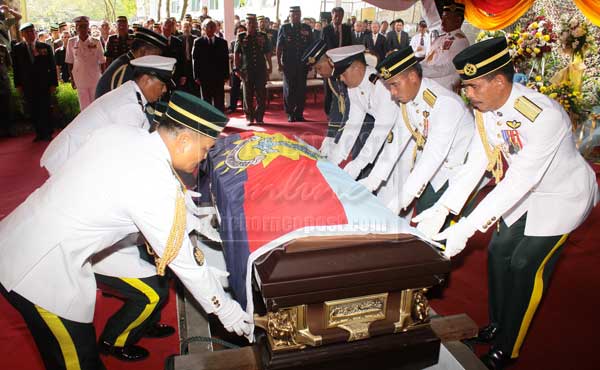 He was then tasked to lead Unit Combat Intelligence Platoon of the Eighth Ranger Battalion to seek and destroy a group of communists in February 1980.

For his bravery in battle, he was awarded the SP and PGB medals by the Yang Di-Pertuan Agong Sultan Ahmad Shah on June 3, 1981.

Kanang was born in Julau on March 2, 1945. He joined the Sarawak Rangers, which was then part of the British army, as an Iban tracker on April 21, 1962. He was absorbed into the Malaysian Rangers following the formation of Malaysia in 1963.

He was married to Helen Latai Ini, and they were blessed with six children and eight grandchildren.

After her demise, he married Brawang in 2011.

On Sept 24, 2011, he was conferred the Panglima Gemilang Bintang Kenyalang, which carries the title ‘Datuk’, in conjunction with the Head of State’s birthday.

Head to the next page for more photos.