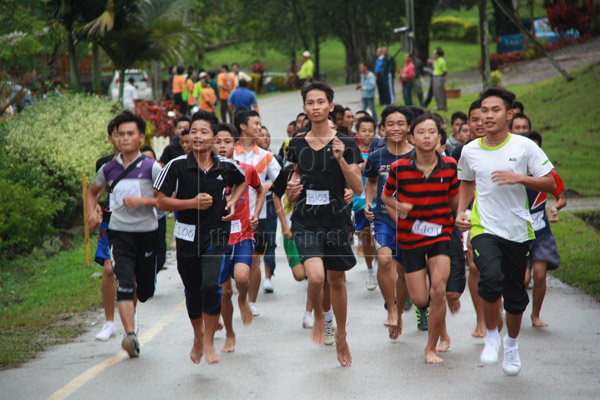 RACE TIME: A section of the 500 runners from SMK Tun Abdul Razak who took part in their school’s annual cross country race which received overwhelming response from students. The race was held to select representatives who will compete in the coming Kuching Inter-School Cross Country Championship to be held at SMK Lundu on Jan 25 and MSSS Inter-School Track and Field Meet on April 23.

Jointly organised by the school and Padawan District Education Office, the race took the runners through rubber farms at Kampung Sungai Riset and the muddy footpaths of Kampung Maang.

Response towards this year’s race saw an increase in participation as compared to 248 runners who took part last year.

Athletes from Orange sports-house dominated in all categories to win overall championship trophy and the sports-house’s captain Willam Ajan was adjudged the best athlete with the fastest time after clocking 18 min 24seconds.

Finishing first in the Boys’ A 8km race was William who was followed closely by first runner up Collin Sim and Murphy Brown in third place.

The top finishers in Boys’ B 7km race were Petrus Aidan, Samual Lopez and Anatasius Ederly while in the Boys’ C race, the top three runners were Augustine , Mackean and Sarentino.

In the girls’ section Cindy Tong, Florina Tawi and Diana Nyambong claimed the top three spots in the Girls’ A race while Enna Biara, Hilda Gura and Hedwin Yensmith topped the Girls’ B category.

The winners in the Girls’ C category were Elvy Anna Kiana, Claudia Anantasia Paulus and Elvin Natasha Gemee. SMK TAR’s co-curriculum senior assistant Lesslee Depiak said the race was kick-start early in order to select the school’s representatives and to prepare them for the coming Kuching Inter-School Cross Country Championship to be held at SMK Lundu on Jan 25.

The school’s representatives will also compete in the coming MSSS Inter-School Track and Field Meet to be held on April 23.

SMK TAR principal Dr Linton@ Jerrah Britten in his closing speech called on the athletes to emulate the success of the state and national athletes. He said the students should look up to the exemplary athletes as good role models.