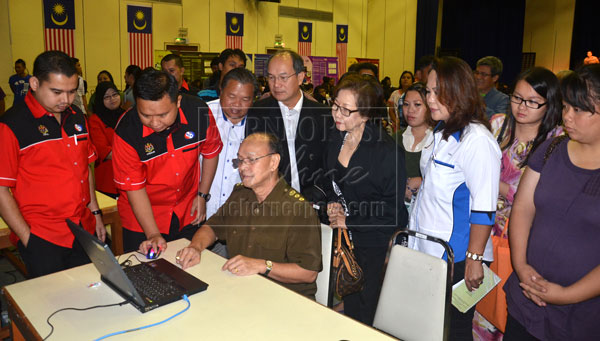 THIS IS HOW: Sagan (seated) and other guests (from third left) Emang, Gerawat and Winnie being briefed by PSC officials on the online registration.

MIRI: The government is committed to getting Bumiputera, particularly the Dayaks and Orang Ulus from Sarawak, to be absorbed in both the Federal and State Civil Service.

“The BN government is aware and concerned about the low number of Orang Ulu and Dayak community in the government service. The issue has also been raised many times in parliament.

“The government takes the cue from there and resolved to find solutions to such problem as PSC’s statistic showed there is very stiff competition among the 1 million applicants for the 40,000 – 50,000 vacancies available,” said Sagan when officiating at the PSC’s briefing and online job registration exercise held at the civic centre here yesterday.

Sagan stressed that in view of the stiff competition; he urged job seekers to be proactive and equipped themselves with the relevant skills and knowledge.

“In view of the great demand for technical workforce especially in Sarawak with the development of Sarawak Corridor of Renewable Energy (SCORE), you need to equip yourselves with the necessary technical skills not just for jobs in the government service but also in the private sector. We have so many vocational and technical colleges where you can train yourselves to improve your niches,” he suggested.

PSC Sarawak secretary Mohd Saiful Sungkih Abdullah when interviewed later by thesundaypost said there was an overwhelming response from the people towards the programme which had entered its 19th series.

“So far some 14,000 people have benefitted from the programme and the biggest number of over 2,000 was recorded in Serian,” he said.

In his speech at the function, he said PSC welcomed efforts by NGOs to collaborate with them, in organising briefings and online registration of job seekers, so that more people could benefit from the programme.

He commended the Federation of Orang Ulu Associations, Sarawak, Malaysia (Forum) for coordinating the programme, which was also supported by the nine associations under Forum and other NGOs like the Dayak Bidayuh National Association (DBNA) and the Dayak Association Miri (DAM).

Saiful added that for the convenience of the people in Miri and its surrounding area, PSC had also set up an interview centre here.

Meanwhile, Forum president Gerawat Gala said the objective of the programme was to get all interested Orang Ulus and Dayaks who have completed SPM, STPM, diploma and degree courses to apply and register online with PSC for job vacancies in the government.

He was happy with the overwhelming response. Some 1,000 people attended the programme with over 600 registering for the job online or checking the status of their applications.

“Our estimate was 500 but today more than 600 registered. We hope the targeted group could also come for similar programmes to be held at the Civic Centre in Marudi on Jan 16 and in Long Lama on Jan 19 from 8 am to 12.30 pm,” he urged.