Monday, May 23
You are at:Home»News»Sarawak»Retrenched workers stage peaceful protest 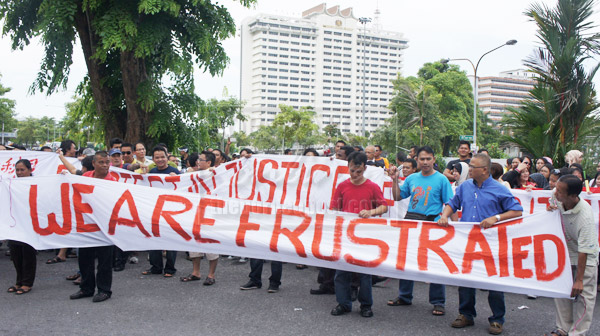 KUCHING: Sanmina SCI Sdn Bhd employees retrenched by the company last year staged a peaceful demonstration to voice their frustration over the delay by the Labour Department in hearing their case yesterday afternoon.

The group representing the 835 retrenched employees gathered peacefully in front of the Employees Provident Fund (EPF) building at Jalan Uplands here, where the department is located.

After about an hour they left disappointed as their case is scheduled to be heard on January 25.

“However, we were informed that the Labour Court hearing will only be held for half a day and there are other cases waiting to
for their respective hearings too,” Lo told the demonstrators.

He bemoaned the red tape the laid-off workers had to go through to get their case heard before the court.

He added that the employees had already appointed a representative to act on their behalf, yet the Labour Department required all complainants to furnish further detailed figures and to sign the forms again.

The committee representing the former workers had been going around in circles to meet these new requirements to file their case.

“This has caused undue delay and as a result we are unable to get an injunction against the company which is moving their assets out of the state,” said Lo.

In an official statement released to the members of the press yesterday, MTUC highlighted their disappointment that attempts to settle the case had failed.

Lo said all the employees wanted was an additional 20 days wages for each year of service.

“This could be as little as RM221.77 extra. That is only USD 70 and we have calculated that half of the employees will get less than RM5000 each,” he stated.

The total claim is RM2 million to RM2.5 million.

“It is unacceptable that the company blatantly ignored the Malaysian Code of Conduct for Industrial Harmony on retrenchment while the Labour Department has yet to take actions against the company for not informing the department 30 days prior to the retrenchment,” Lo added.