Thursday, October 21
You are at:Home»News»Nation»Pilot escapes with minor injuries as light aircraft crashes on highway 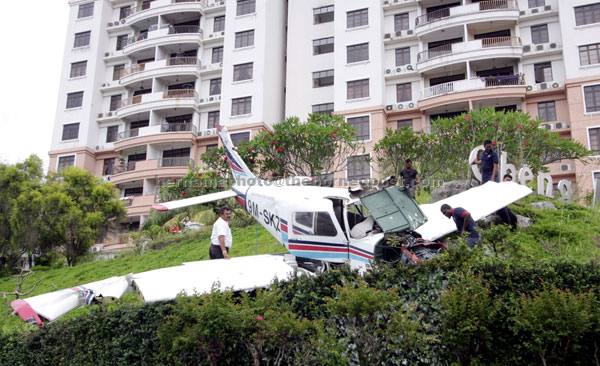 MELAKA: The pilot of a light aircraft sustained minor injuries when it crashed in the Alor Gajah-Melaka Tengah-Jasin highway near the Cheng Height condominium yesterday.

P Devenessrao, 20, from Bahau, Negeri Sembilan, a trainee of the Malaysian Flying Academy, was alone in the Piper PA-28 at the time of the incident, just after noon.

He sustained head and neck injuries and was warded at the Melaka Hospital.

A witness, Zameri Nawi, 50, from the Melaka Tengah police headquarters, said he noticed the aircraft tottering about noon before it struck the branches of a tree and crashed on the road.

He was speaking to reporters when met at the scene of the crash.

He said the aircraft later crashed about 30 metres from the condominium before the pilot emerged with minor injuries.

“Policemen have been stationed at the site of the crash while awaiting a team from the Department of Civil Aviation to investigate the cause of the crash,” he added.