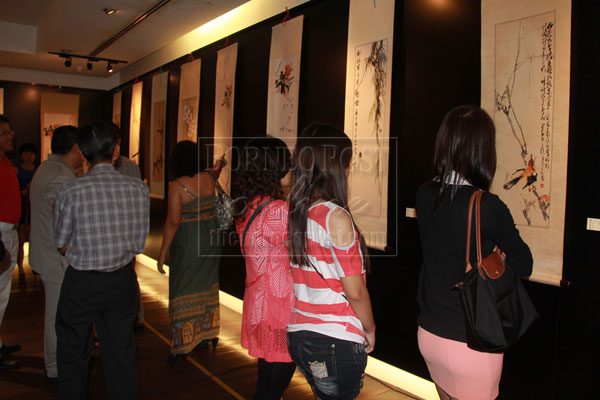 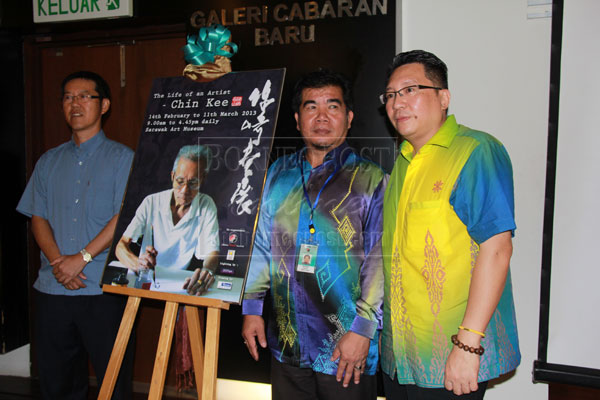 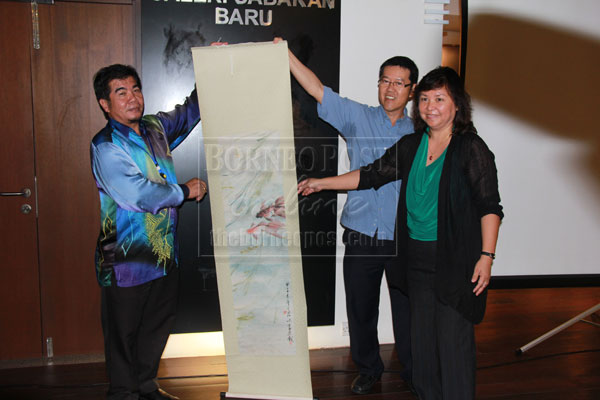 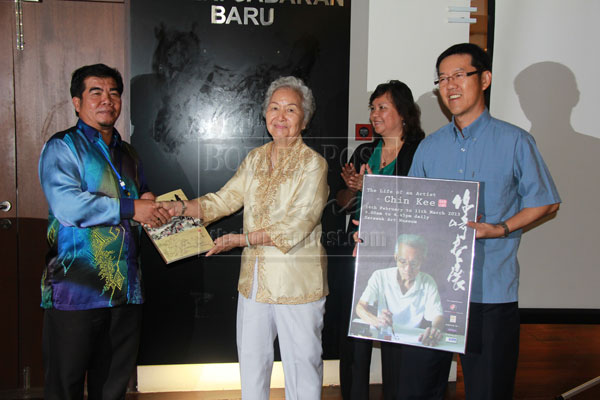 FOR YOU: Bong (second left) hands over a book as souvenir to Ipoi as Helen (second right) and Hong look on.

KUCHING: ‘The Life of an Artist-Chin Kee’ art exhibition is one that can contribute to the preservation of the local cultural heritage for the benefit of future generation.

In saying this in his speech at the opening ceremony of the art exhibition at the Sarawak Art Museum yesterday, Assistant Minister of Heritage Liwan Lagang added this was an exhibition to celebrate the colourful life of one of our state’s renowned artist and showcase his work to the new generation.

Liwan’s speech was read by his representative who is Sarawak Museum director Ipoi Datan.

He said the late Chin was an active member of the local art scene, held the position of vice-president of the Sarawak Artists Society in his formative years between 1985 and 1990.

He had also served as an advisor for the Sarawak Artists Society and the Kuching Chung Hua Arts Association.

“His influence on the artistic life of Sarawak is crystal clear and enduring,” said Liwan.

Chin followed his mother to Sarawak when he was seven and made the state his home.

He was a leading beacon for members of the societies for artists here, said Liwan.

Liwan said this exhibition profiled the work of an artist whose works blended his Chinese ancestry and training with his life in Sarawak so as to enable him to produce a unique showcase of a multi-cultural heritage.

Chin’s journey as an artist began in Hong Kong where he studied arts from Prof Chao Shao-An till 1961.

“This illustrious professor was a key figure in the ‘Ling-Nan Art School’ that produced many students who are now prominent contemporary artists around the world.

“He (Chao) encouraged the use of the elements from other art forms and cultures. All these things can be seen in Chin’s own work. He is the pioneer who brought the know-how of Prof Chao and the ideas of the Ling-Nan Art School to Sarawak.”

He said it is here in Sarawak that Chin developed his skill, honing his brushwork and pushing the boundaries of his art. He took what he had learned and applied them to local subjects, left with a unique visual record of Sarawak.

“But his legacy goes beyond that. In tandem with his teacher, Chin too chose to share his knowledge with students and fellow artists here,” he said.

Chin served 40 years as a teacher in Kuching. He was active in the Kuching Arts Club (later renamed the Sarawak Fine Arts Society) and their annual shows from 1956.

Between 1970 and 1980, his works were displayed in his solo exhibition and in group shows all over Malaysia and beyond, like China, Taiwan and the United States of America.

The art exhibition is co-organised by the Sarawak Museum Department and the Sarawak Heritage Society.

Members of the public are welcome to view Chin’s 56 pieces of art work painted between the 1950s, 1960s and the 1990s at the Sarawak Art Museum at Jalan Tun Abang Haji Openg, starting from 9am to 4.45pm daily.