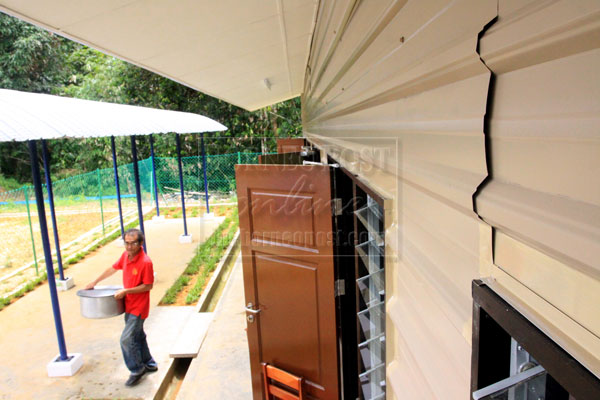 WALL OF ZINC: Shoddy work. The outer wall of one of the SK Bengoh new blocks is made of zinc. — Photo by Jeffery Mostapa

KUCHING: The relevant government agencies are urged to be more selective when awarding development projects to contractors in future to ensure that the works are of high quality.

Deputy Tourism Minister Datuk Dr James Dawos in giving this reminder said only contractors with good track record and experience should be considered for government projects to ensure quality results.

He said this should also apply to projects implemented in rural areas and not only those in big towns and urban centres.

Dawos, who is also Mambong MP, said contractors known to be good should be considered even if the prices they quoted were slightly higher than the others.

“I suggest that the relevant government agencies look into the background of certain construction companies and be more selective. If they want good results they should not select those that do not have much experience or those without proven track record,” he said.

He told reporters this after launching the ‘Care For Our Next Generation’ programme organised by the State Admin Officers and Diplomatic Association in collaboration with National Institute of Public Administration (INTAN) diploma students from its campus in Terengganu at SK Bengoh near here yesterday.

According to Dawos, the construction of the two new blocks of SK Bengoh was a classic example of incompetence on the part of the contractor handling the project.

He said the work quality was ‘irritatingly bad’ compared with the tender price of more than RM900,000.

“To do only two blocks, including a dormitory, bathroom and toilet, to me this is too expensive. Moreover the work quality is not there.

“Apart from only doing two small buildings the contractor also caused much degradation to the environment,” he said.

He was referring to the many mosquito breeding grounds at the school compound, where aedes mosquitoes could breed, left behind by the contractor.

He thus called on the relevant authorities to audit the project to check whether the funds were justifiably spent.

“In fact before the handing over of the project (expected next week) the Public Works Department as the developer of the project needs to audit the work of the contractor to check whether the funds spent is justifiable or not,” he said.

According to Dawos, the school project was implemented sometime last year but the planning was done way back in 2006.

“I planned this together with one of officers at the Education Department in anticipation of transfer of students from SK Semban and SK Taba Sait when the whole villagers move down to the new resettlement area.

“However, the planning is now irrelevant because the students from the two schools will be using the office of the BRS (Bengoh Resettlement Scheme) contractor for their school,” he said.