Tuesday, August 16
You are at:Home»Features»Small town with many LINKS

Many East Malaysians actually have never heard of the name. And some might even ask: “What is it?” 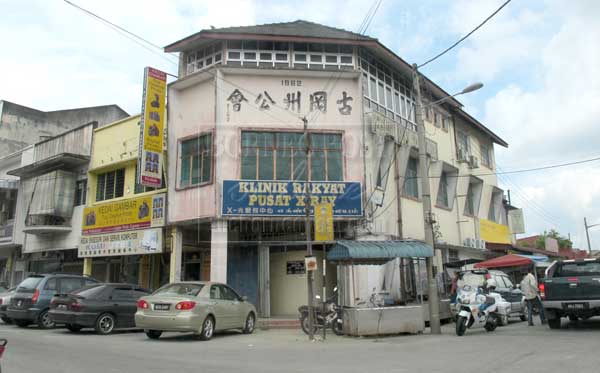 ORIGINAL: One of the oldest shophouses in Bidor.

Bidor is a lovely small town in Perak, well known for many ‘links’ — to use a trendy term befitting the 21 Century.

Bidor in Chinese is Mei Loh which, to Sarawakians, is like a combination of Miri (pretty) and Lutong (Loh Tong – Loh in Chinese is a kind of musical instrument).

Bidor is a very old small town in the District of Batang Padang, Perak.

According to Malaysian history, the town was established by Syeikh Abdul Ghani who also became the first village headman after its founding.

The village, situated by the Bidor River (hence the name) was a local commercial centre trading mainly in goods.

Later, the tin mining boom brought in the Hokkien-speaking Hoklo who came from various parts of Perak as a result of triad wars among the Chinese. Today it has about 25,000 residents.

According to several local Malaysian historians, the area used to be part of the Gangga Negara (based on the 8-9th century bronze Buddhist Avalokitesvara statue found in 1935 in Bidor).

The people in this area accepted Hindu-Buddhism around 900 years ago. That makes the area one of the oldest settlements in Malaysia.

Most Malaysian Chinese and politically conscious Malaysians would know about the New Villages of Bidor.

In 1948, the declaration of Emergency by the then British colonial government set up several New Villages around Bidor, the most famous being the Kampung Baru Bidor Stesyen just across the rail line of Bidor. Its Chinese name is Fire Car Head.

Two other New Villages were also se up — Tanah Mas and a delightfully named village, Coldstream.

By the 1960’s, the enterprising villagers helped turned Bidor into a major fruit (seedless and crunch guava, sweet and juicy pomeloes and juicy and crunchy bell jambu) and vegetable growing area, not only for Perak but the whole of peninsular Malaysia. It is still strong in fruit growing.

Most west Malaysians who love petai, the famous or infamous stinky beans, will stop at Bidor to get the best of the freshly plucked beans, tied together in bundles at RM30 to RM50 each. These wholesalers sometimes retail with smaller bunches but are adamant their beans are the best from the Orang Asli “who climbed up the trees just that very morning!” It cannot be fresher than that.

The petai comes from the hilly slopes of Titiwangsa Range (one of the loveliest names in the world for anyone’s ears).

Many Sarawakians who have lived with petai trees grown by their great grandfathers, would know how tall each tree could grow after 15 years!

Some can even be 200 feet tall and an male Orang Asli is just the man for the job. A townie might not even scale more than 10 feet before getting dizzy.

RM30 is a small price to pay for 20 of these precious bean pods. If one does not want to buy the beans, one can have a taste of them in one of the stalls in Bidor. Order stir-fried petai with prawns and belacan to go with the famous local noodles and other dishes!

An entire road is reserved for the trading of petai, the smelliest and largest of equatorial edible beans in Bidor.

Housewives, businessmen and women and tourtists flock to Bidor and petai is the first word they have on their lips. 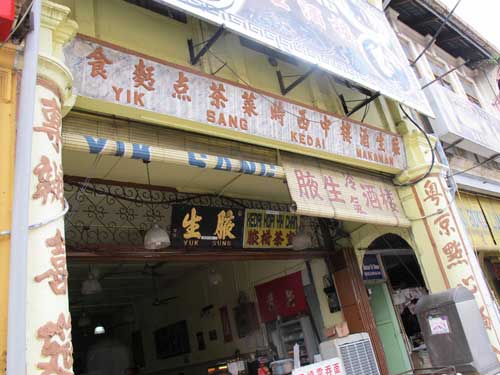 HIGHLY RECOMMENDED: Yik Sang — one of the most famous Cantonese-style coffee shop-cum-restaurants in Bidor.

Roy Davis Linville Jumper in his book Death Waits in the Dark, wrote: “The Senoi Praaq is one of the finest jungle fighting forces during the Malayan Emergency. Hence the war against the communists in the 50’s and 60’s brought the reputation of the Senois as a strong unit of fighters to the forefront in the English media, in particular.

The name Senoi Praaq means war people or those who fight in the Semai language. The Senoi Praaq is a unit of the Royal Malaysian Police made up almost entirely of the Orang Asli of peninsular Malaysia.

Jumper wrote other books which have references to the Senoi Praaq, Orang Asli and the Malayan Emergency such as Power and Politics: The Story of Malaysia’s Orang Asli, 1997; Orang Asli Now: The Orang Asli in the Malaysian Political World, 1999; Ruslan of Malaysia: The Man Behind the Domino That Didn’t Fall, 2007.

The Senoi Praaq was the brainchild of ROD Noone, a member of the then British Administration in Malaya during the Malayan Emergency.

He pressed for the formation of the Senoi Praaq as a deterrent force to stop the communist influence over the remote Orang Asli (aboriginal) settlements in the deep jungles.

In 1956, General Gerald Templer finally agreed to the formation of the Senoi Praaq as an arm of the Department of Aborigines.

Noone thought of the original idea to set up a Senoi Unit, which was established in May 1956, and Noone was made the commanding officer, serving from 1957 until 1961. The Malayan Emergency was officially declared over in 1960 – (Wikipedia)

Apart from picking up some pointers from various sources, another interesting note is that of wearing of the RED Beret. This unit of Orang Asli force was bestowed the Red beret by the British, which is worn with pride by the unit to this day.

During the restructuring of the Police Field Force in 1997, the Senoi Praaq was made part of the Police General Operations Forces and to wear the blue beret but this was rescinded and the right to wear the red beret was restored in 2003 – (Wikipedia)

Yik Sang Coffee Shop in Bidor is a good pitstop, offering well-cooked food and a long menu. However, travellers must not be disappointed if the herbal duck soup is all gone for the day by one o’clock. It only shows the dishes are popular and the chefs are not able to meet the demand on busy days. 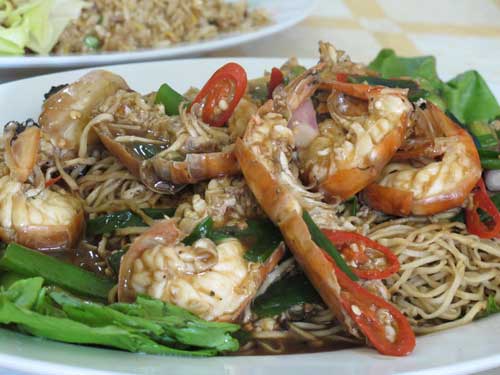 Pun Chun is another restaurant for tourists. The savvy local travellers prefer their own selections of good outlets like Yik Sang where their own parents and grandparents went to in old days.

Yi Sang Coffee Shop also links to the very famous delicious empurau known as yuen bu law (never grow old fish). At RM350 per kg local Perak price, the fish is steamed Cantonese-style and often booked in advance. Or the towkay will call up friends and loyal customers that a batch of fresh empuraus has arrived.

Usually the empuraus, not domesticated, but fresh from the rivers in Perak and Pahang, are supplied by the Orang Asli and local fishermen from all races. The hooked empuraus are specially admired by the Chinese who have in recent years developed a taste for good fleshy river hooked empuraus.

The proprietor said: “Two thick slices of a good empurau are already very fancy for a family to dine and talk about for a year!”

He would make a suggestion to try, try, try — but with a price of usually around RM250 for two slices, travellers might be hesitant at first before taking out their big wallets. Empurau prices are on an upward trend. Perhaps, locals will have to wait for more successful breeding of this special fish.

Though linked with nyonya kuih and special pastry, Bidor is more a Cantonese town. Regardless, a nyonya kuih seller has made a mark in a special corner of the town.

He has been well-known for the past 40 years. Selling from 2 pm everyday, except when it is raining heavily, this ah chek (uncle) has “fans” queuing to his stall everyday.

Even the selective nyonyas from Melaka also say his kuih is good — and he has been keeping his standards high. That’s why he can sustain his business for so long. His old bicycle is still in good condition.

In one shop, a trendy old timer pastry chef makes all sorts of pastries (a fusion of old Chinese and new western styles).

He creates lots of shapes — animal shapes and other trendy shapes. Doraemons, Hello Kitty’s and maybe even a Hobbit or two can appear on the shelves of the shop. A visit, even without buying, is like a tour of a pastry-shapes museum.

The older shophouses of Bidor tell the history of its people. The associations, the societies and the clans have built their shophouses similar to those in Singapore and elsewhere in Southeast Asia, with the ubiquitous five footways, colonial pillars and Dutch-influenced facades which block the roofs from view.

A fine art lecturer from Kuala Lumpur said Bidor is so beautiful that he and his friends should make a documentary to capture the beauty and the special architecture of the town on film. He believes shophouses like those in Bidor have great historical value and many stories to tell! 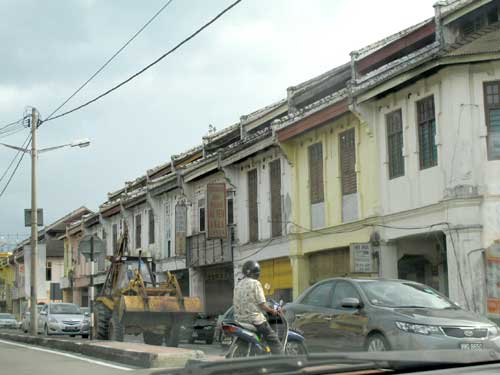 RELICS: Shophouses of a bygone era lining the main street.

New shops are coming up and one can see the people of Bidor getting excited about new developments.

KFC is found at the junction of the road into Bidor. Alongside KFC is Bidor’s biggest tyre-shop, occupying four shoplots, the owner being the proprietor of the whole building which is incidentally the biggest and tallest in Bidor.

Many younger generation of Bidor families are very well educated and working outside the town.

Perhaps herein lies the future of Bidor – the brain power of the future generation and the wisdom and saved capital of the older generation.

Bidor has a good and solid agricultural base which no one can take away. Like so many other Malaysian small towns, Bidor might see a rejuvenation in no time.