Friday, August 12
You are at:Home»News»Sabah»Govt keen to work on environmental protection with organisations 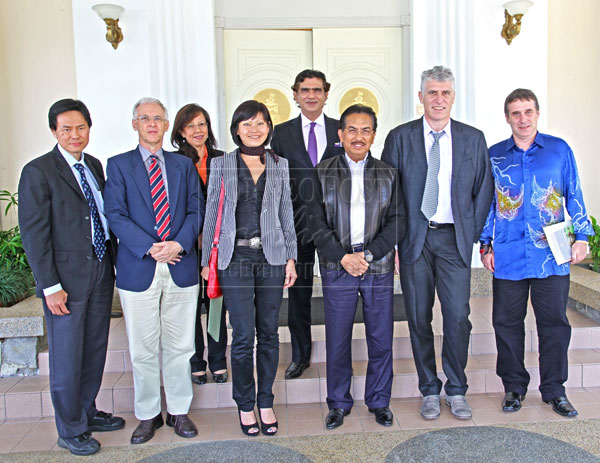 KOTA KINABALU: Six conservation and research organisations yesterday handed over a three-point call to action to the Sabah State Government, a move that saw both sides agreeing to work together to further map out the recommendations.

Chief Minister Datuk Seri Musa Aman who received the one-page document from leaders of the organisations at Sri Gaya, near here, was positive about points that were raised.

“I take note of your recommendations. Actually some of the steps have been taken or are in the process of implementation.

“We will study the rest in further detail to see their viability and we are also keen to work with you in seeing the recommendations through,” Musa said.

He said yesterday’s meeting was important to the State Government which shared the same objective with civil society in safeguarding Sabah’s environment.

They recommended that all areas currently under assessment for total protection within the Yayasan Sabah area and in addition, the Kuamut Forest Reserve, be elevated to Class 1 Protection status as soon as possible.

It is further recommending for Yayasan Sabah to conduct independently verifiable moves towards certification of all agricultural and forestry plantations within its area through the Roundtable on Sustainable Palm Oil (RSPO) and Forest Stewardship Council (FSC), respectively.

The third call is for the State to conduct an immediate review of all policies, practices and plans within the critical elephant ranges of Sabah, to be carried out by a dedicated Government-industry-NGO-research task force.

Musa said all stakeholders should work together if Sabah’s conservation and environmental protection efforts were to succeed.

He said the initiatives by groups such as the six were important and have helped improve environmental standards in Sabah.

Musa added that it was for this reason that the Sabah government through its agencies continued to collaborate with some of these NGOs in research, restoration, education and training in conservation and forest management.

“Having said this, it must be pointed out the the Sabah government itself has one of the best forest management policies in Malaysia with the highest percentage of Totally Protected Areas (TPAs) in the country,” he said.

He added that the public may not be aware of some of the efforts and policies undertaken by the government, perhaps due to lack of publicity.

Among others, he said, the government has embarked on a massive tree replanting effort involving numerous indigenous species so as to allow the forest to regenerate.

“We also have the political will to make a decision that was not necessarily popular in 2007 and ceased logging in the three major areas of Ulu Segama, Malua and Kalumpang and forgo billions in timber royalties,” he said.

Touching on the recent deaths of 14 Borneo pygmy elephants, Musa said he was deeply saddened by the incident and the State government would do its level best to prevent any future occurrence.

“Whether the cause of death is deliberate or not, the tragic outcome has impacted all of us. We don’t want global attention for the wrong reasons. Neither do NGOs who have worked so hard on wildlife conservation efforts,” he said.

“We want to take the crisis to address the systemic issues, and we worked hard to come up with a three-point call to action, which we were able to personally hand over to the Sabah Chief Minister.

“The Chief Minister was positive, and said the State would require our help in realising what we have proposed.

“We will sit with the Sabah Forestry Department and further map out our call to action based on realities on the ground and once we have a roadmap, it was indicated to us that it will go to the State Cabinet,” Ong said.

Ong said the conservation and research community wanted to continue to work closely with the State, and that this message was also related to Musa.

“We came out of the meeting with much closer ties between the conservation community and the State Government. Today (yesterday) was an important milestone for the government-NGO partnership,” she said.