Saturday, May 15
You are at:Home»Features»Natural ingredient from the jungle

TEPUS which belongs to the ginger plant family is a favourite among gatherers and sellers of edible jungle produce. 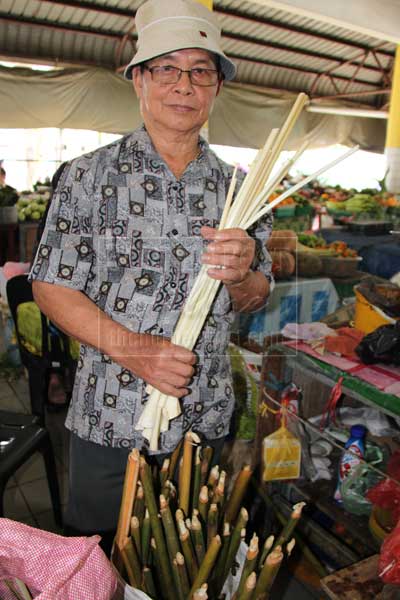 David Senan, 70, a vendor at the Kota Sentosa wet market, said the soft stems of the tepus were traditionally used as an ingredient for delicacies prepared by the Dayak community.

“They can also be eaten raw as salad — just dip them in prawn paste sauce – or cooked with chicken or other meat in bamboo,” he told thesundaypost.

“It gives out a special aroma – very appealing and appetising,” he said.

The stems can also be used as an ingredient for steaming freshwater fish.

“For me, this goes really well with freshwater catfish. It helps eliminate that strong raw fishy smell as well,” he added.

David’s favourite dish is sayur rebus or bamboo shoot soup, using dried ikan bilis (dried anchovies) as a substitute for the traditional dried or smoked fish or meat, often consumed by the natives in the old days.

He said before cooking, the bamboo shoots had to be sliced and boiled until the water turned brownish (like tea), and then placed in a sieve to drain the water.

Tepus is still plentiful in his kampung along Borneo Highland Road, growing mostly at the foothills of the village.

“The plant can be found at cooler spots, especially under a canopy of trees,” he noted. 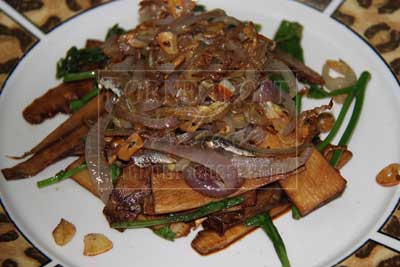 According to David, the soft tepus stems are well liked by the Dayak community who also use them for other dishes.

“It’s really up to individual choice,” he added.

David believes in the goodness of naturally grown jungle plants, saying they are free from pesticides or chemicals.

“They have their own nutritional and maybe even medicinal values,” he reckoned.

“For me, I naturally like the soft tepus stems as they can be used in all Dayak dishes and cooking. If you want to make them tastier, you can always add other ingredients.”

Revealing another recipe, he said one could fry bamboo shoots with soft tepus stems and anchovies, and add soya sauce to the mix for a fusion of traditional and current tastes.

“I believe this recipe is nicer to many people, especially the younger generation,” he said, referring to his children and grandchildren who prefer dishes that are different from his.

David said there were many types of jungle produce now being sold by the villagers.

He understood more and more eateries were being opened in the city that included wild jungle plants in their menu, especially limindin (ferns), a much sought after leafy vegetable.

“If these places can lure customers with a taste for edible wild plants, it would be good for vegetable sellers like us.”
Apart from tepus, David also sells other jungle produce such as bamboo and fern shoots which are plentiful in his village.

Out of curiosity, I cooked a dish, using a recipe, shared by David, and discovered that the soup of tepus I prepared with boiled bamboo shoots, sawi
Dayak and dried anchovies reeked of the ginger plant – not unlike the bitter smell expelled by some insects.

However, there is a slight difference with bamboo shoots prepared with tepus and sawi Dayak, fried with dried anchovies, or slices of red onions and garlics with soya sauce. It is more savoury and smells less of tepus.