Thursday, July 7
You are at:Home»News»Sarawak»‘PBB must field only winnable candidate for Batang Lupar’ 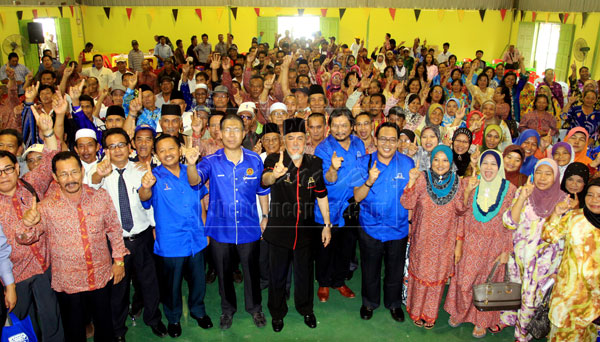 SIGN OF UNITY: Asfia in black suit with Julaihi on his right and the rest of the guests and the party members after the event.

He added that the person must also be able to work with all the assemblymen in the constituency.

“For this election, we want to win, and to win we must have a winnable candidate.

“Equally important is that the candidate must be able to work with the state assemblyman and have a common direction and vision to help the people and transform the area,” Asfia said, at the opening of 13th general election preparation briefing for Batang Lupar, held at Kampung Sg Ladong, Sebangan, here yesterday.

The gathering was attended by leaders of all the 34 PBB sub-branches in Sebuyau.

Julaihi, who is Assistant Minister of Industrial Development (Investment and Promotion), and Rural Development was among those present.

Asfia, who is State Legislative Assembly (DUN) speaker said internal friction between the candidate and the assemblymen and internal squabbles between party members would only weaken the party, thus affecting the chances of Barisan Nasional (BN) in the coming polls.

Advising BN supporters to be ready to counter issues expected to be raised by the opposition during the election, he pointed out among the accusations would be that BN was grabbing the people’s land which they could counter by explaining clearly that land acquired by BN was meant for development,