Monday, February 6
You are at:Home»News»Sarawak»Blind couple loses house to fire
For the freshest news, join The Borneo Post's Telegram Channel and The Borneo Post on Newswav. 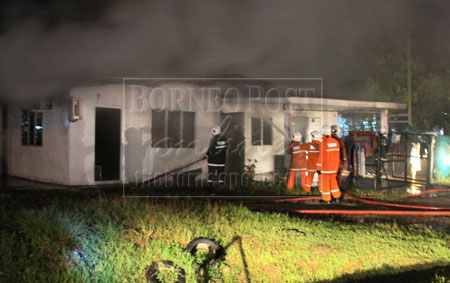 SMOKY: Firemen dousing the flames so that it will not spread to an adjoining house.

KUCHING: A blind couple and their teenage daughter escaped a fire which broke out in the kitchen of their house at Jalan Stapok Utama in Batu Kawah at midnight yesterday.

Realising a fire had broken out, he woke up his wife Lintu, 41, along with their 18-year-old daughter, who led the blind couple out of the single storey terraces house to safety, taking with them important documents and some belongings.

Two fire engines were despatched to the scene following a call and the firefighters were able to control the blaze, which had spread to and partially damaged the rear section of an adjoining house before it was put out. 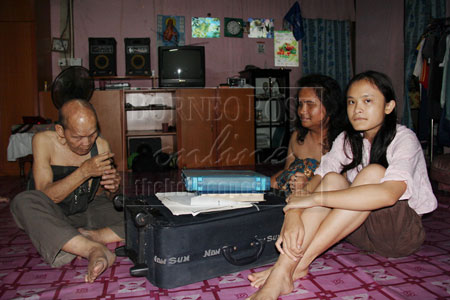 SAFE AND SOUND: Oyo and his family at their neighbour’s house with a few items they managed to salvage.

Oyo is still wondering what could have caused the fire as there was nothing cooking in the kitchen at that time.

The couple has  been staying in the house for the past eight years, and are employed at Sarawak Society for the Blind centre at Jalan Ong Tiang Swee.

Oyo said the family will be putting up with a neighbour for the time being while he figure out how to find the money to repair the damaged portion of his house.