Saturday, August 13
You are at:Home»News»Sarawak»Freak coconut could be a windfall for cobbler 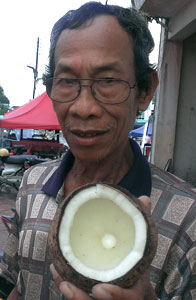 WINDFALL?: Hassan showing his ‘precious’ find inside a coconut.

SARATOK:  A cobbler had a pleasant surprise when he saw a hard white object inside a coconut he had bought from a market here yesterday.

Hassan Derahman, 64, from Kampung Masjid here said he had never seen such a thing.

Initially, he thought it was a normal coconut pearl or cotyledon – a spongy mass found in the shell of sprouting coconuts.

However, it was only after he had touched the thumb-size object that he realised it could be a phenomenon of nature for it was as hard as stone. He added that several of his friends whom he showed it to had also never seen such an object, which was definitely not an ordinary coconut pearl.

“A few of my friends considered the object as precious and had offered me between RM1,500 and RM3,000 for it, but for the time being, I have decided not to sell it despite the attractive offer,” claimed Hassan.