Tuesday, February 7
You are at:Home»Business»BizHive»Seeing tourism through the eyes of Sarawak’s ‘big village’
For the freshest news, join The Borneo Post's Telegram Channel and The Borneo Post on Newswav. 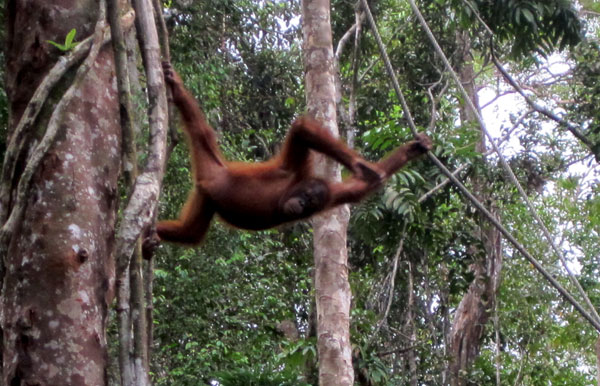 FRIENDLY LOCALS: Photo shows an orangutan at a local natural reserve which is a major tourism attraction. By 2014, the State of Sarawak is targeting six million tourist arrivals, up from more the more than four million that came in 2012.

Kuching is a big village, a kampung besar. This is an honest perspective from an outsider after spending two weeks in Sarawak’s capital, a remote outpost of Borneo that is somewhat more than a town but less than a city.

It is this intimacy, bred of an idiosyncratically Borneo reclusiveness, that has lured in visitors from near and far through Kuching, or ‘Cat City’, the aptly domesticated gateway to more primal unknowns. 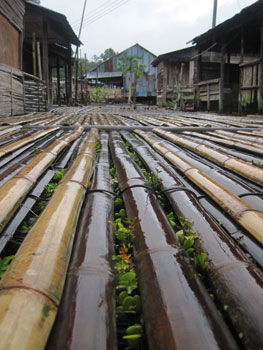 FASINATING PLACE: Photo of a Bidayuh longhouse, one of the last remaining of the Bidayuh ethnic group. Tourism has been a part of Sarawak’s DNA for the decades that have elapsed since foreigners began penning their fascination with this slice of Borneo, today still a byword for exotic flora and fauna of an alien kind.

Tourism has been a part of Sarawak’s DNA for the dec­ades that have elapsed since foreigners began penning their fascination with this slice of Borneo, today still a byword for exotic flora and fauna of an alien kind.

“Before Malaysia’s forma­tion as an independent state, Sarawak was very much iso­lated – a place that writers would romanticise, describing a far-flung land rich in biodiver­sity and home to over 30 ethnic groups,” deputy Chief Minister Tan Sri Alfred Jabu recently remi­nisced with Inside Investor.

Today, Sarawak still embodies this timeless allure, and foreign­ers are predicted to increasingly continue making the haul through Kuching and other international gateways.

By 2014, the State of Sarawak is targeting six million tourist arrivals, up from more the more than four million that came in 2012.

Yet hoteliers in Kuching have become wont to bemoan the lack of flight connectivity to their quaint home, as well as the fact that human capital has been sucked out of the domestic tour­ism biosphere.

“We suffer from a severe man­power shortage,” Rosemarie Wong, director of The Ranee, a luxury boutique-style hotel in Kuching, told Inside Investor.

“Those experienced in the hospitality industry are work­ing overseas or on international cruise ships,” she added.

Helpful in part, Sarawak will soon seriously shape up on the connectivity side of the prob­lem.

This year, a major boost for tourism will come from extended flight connections, first of all through the newly launched airline, Malindo Air, which started flying its inaugural Kuala Lumpur-Kuching and Kuala Lumpur-Kota Kinabalu routes in March 2013.

Malindo Air chief executive officer Chandran Ramamuthy had said that efforts would con­tinuously be made to step up con­nections, starting with 12 routes by end-2013, making big waves for the young airline, which had already begun creating a word-of-mouth buzz with its low-cost model that paradoxically offers great service and amenities.

Additionally, Malindo Air, 49 per cent owned by Indonesia’s Lion Air, has ordered a sizeable number of aircraft to expand its services, with a fleet that is slated to increase to 12 by end-2013 to match the new routes planned.

Now here is the part really worth zooming in on – if all goes as hoped, the Indian capital of New Delhi would become Malindo Air’s maiden international desti­nation some time in the middle of 2013, followed by direct flights from Kuching to Indonesia, Japan, China and South Korea within two years.

The fresh link to New Delhi is most significant because it offers a cure to the other hurdle impeding Sarawak’s potential for growth in the tourism sector.

Through a connection to India, Malindo is actually whipsawing at the blocade facing tourism by opening up a bridge for human capital from the overpopulated, yet educationally credible, South Asian nation.

The effects could be equally manifold: Indian workers could be given a hand to fill the void not just in the tourism sector, but also in other areas where human capital has become criti­cally low in supply, such as research centers, technically advanced heavy industries and agriculture – namely oil palm, a business that suffers from a shortage of labourers and cur­rently depends on 80 per cent of its workforce from neighbouring Indonesia.

Yet much like wild safaris best exemplified in east Africa, Sarawak has great potential for personalised eco-tourism, where customised explorations through the hinterlands can be run by business savvy entrepreneurs who are keen to capitalise on the projected 50 per cent increase in tourist arrivals.

This may be the next fasci­nating chapter of the state, but countless variables still stand in the way. One thing can be said for certain, however; Sarawak will always be a place worth penning about, no matter the story that unfolds.

Previous ArticleDream Barca, Real ‘Clasico’ final possible after semi-finals draw
Next Article The infliction of DPR Korea to the world