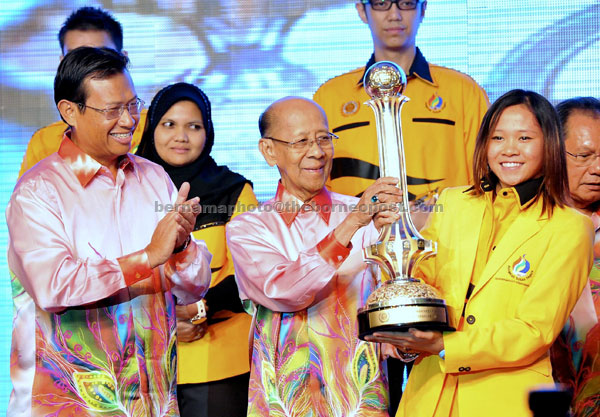 The prestigious annual national sports award held at a leading hotel here saw Chong Wei clinch his fourth National Sportsman crown (2005, 2008, 2011) while Pandelela wins her second title after having won it in 2011.

The national diver had won a bronze medal in the 10m individual platform at the Fina/Media Diving World Series) in Dubai, a silver at the first series of the 2012 Fina World Diving Championships in Moscow, Russia plus the gold medal at the 26th SEA Games.

The highlight of her achievement was winning the 10m platform bronze medal at the 2012 Olympic Games in London.

Chong Wei, the country’s most celebrated single’s player, held the world’s number one player ranking for a record 40 months since 2008 until last year and after losing the number spot due to injuries, has managed to regain his number one status.

The best achievement of the 30-year-old player last year included being champion in five international championships among them, the Super Series and the Super Premier Series under the ambit of the World Badminton Federation.

Meanwhile, winner of the National Paralympic Sportsman award received RM10,000 but there was no winner for the woman’s category. — Bernama