Tuesday, September 28
You are at:Home»News»Sabah»SAPP accuses Pakatan of ‘sabotage’ 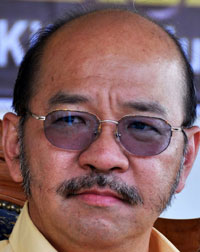 KOTA KINABALU: Sabah Progressive Party (SAPP) president Datuk Seri Yong Teck Lee has accused Pakatan Rakyat (PR) of “sabotaging” its chances of winning by fielding candidates in constituencies where his party is contesting and PR has little or no influence.

He cited for example, PR is fielding their candidates in Sepanggar, Putatan and Inanam where SAPP candidates are contesting.

“Pakatan Rakyat leaders like Lim Kit Siang had recently acknowledged that Pakatan can’t win in Sabah and yet they decided to contest in Sepanggar which is traditionally fought by SAPP and Umno. The same with Putatan and Inanam. The motive is to split the Chinese votes there so as to make Umno/BN win,” Yong asserted.

He contended that Dr Roland has no business to be in Inanam since his base is in Kepayan all this while.

“Originally, he (Dr Roland) wanted to contest in Kepayan but the seat was grabbed by DAP candidate Dr Edwin Bosi. Desperate to become a candidate, he decided to settle for Inanam. We should reject such a candidate,” he said when speaking at SAPP ‘Kopitiam Ceramah’ at Foh Sang commercial centre on Wednesday night, after announcing SAPP candidates for the May 5 general election in Kepayan.

Yong expressed discontent over the “game plan” of the Peninsular-based opposition coalition which he described as no different from the BN in that it was never in favour of granting political autonomy to Sabah.

He reiterated that like BN leaders, PR leaders too realized the far-reaching implication of losing political control over the natural resources-rich Sabah, especially knowing full well the challenging financial position that the country is in now.

Hence, PR leaders would rather let BN win than to let local opposition parties like SAPP win in the general election, he claimed.

Yong said “Sabahans are not donkeys or monkeys, but the ‘master keys’ of Sabah” who should have full control over their own affairs instead of being dictated by politicians of Malayan parties.

Earlier, he took a swipe at DAP for “losing” some of its seats to PAS, such as Merotai, Tanjung Aru and Batu Sapi.

“How can we in Sabah expect DAP to represent us, both in the Parliament and the State Legislative Assembly, when they can’t even stand up to PAS?” he asked.

Meanwhile, SAPP Wanita chief and Luyang candidate Melanie Chia pointed out that despite the “hostile and mischievous treatment” from PR, SAPP has kept its promise of backing PR to capture Putrajaya, by focusing on contesting state seats, while leaving the majority of the parliamentary seats to PR.

“This clearly shows that SAPP is a party of principles and is trustworthy,” she said.

Of the 25 parliamentary constituencies, SAPP is only contesting eight of them, namely Kudat, Kota Marudu, Sepanggar, Putatan, Kimanis, Sipitang, Tenom and Tawau.

Melanie, who is defending her Luyang state seat, urged members of the public who have any doubts about SAPP and its struggles, to come forward to attend its ‘Kopitiam’ ceramah which will be held at the same venue every night, starting from April 20 to May 4.

She stressed that this is important so that they could clear whatever doubts or misconceptions that they have on SAPP and its leaders as a result of wild accusations and lies cast by its rivals.