Sunday, May 22
You are at:Home»News»Sarawak»Santubong village put under village extension programme 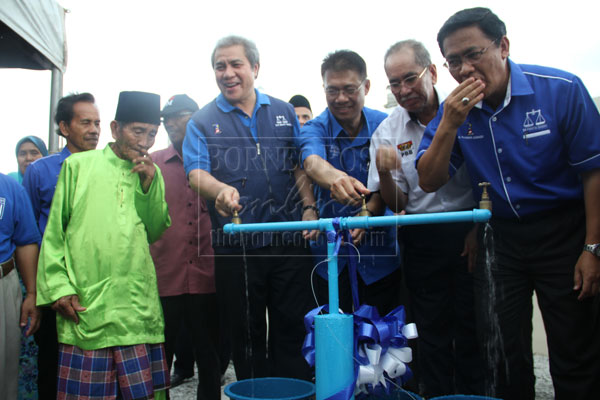 KUCHING: Kampung Sungai Berdaun at Santubong near here is to be placed under the village extension programme so its basic infrastructure and people’s socio-economy can be improved.

Home to about 117 settlers, all 37 households in the village do not get supply of electricity and treated water despite being only 25 km from the city.

Public Utilities Minister Datuk Amar Awang Tengah Ali Hassan yesterday said allocations are available but the main issue was some of the land status. The state is in discussion with the Land Consolidation Development Authority (LCDA) and the Land and Survey Department to resolve the matter.

Awang Tengah who is also Resource Planning and Environment Second Minister said the government is open to develop the village either through an ‘in-situ’ approach or place the whole area under the village expansion programme.

“A more systematic development approach is needed to develop this area, not only for Kampung Sungai Berdaun but all villages in Santubong along Jalan Sultan Tengah. At the moment, we are still unclear on the land status but both agencies will ensure land titles are issued.

“On the bigger picture, the development of this village will include economic development such as establishing cottage industries and involving locals in small businesses.

“We want to empower the people to have better income while improving their standard of living,” Awang Tengah said when officiating at the meet the people programme in the village which coincided with the launch of a treated water supply to the village via a single source in front of the village mosque.

The treated water project costing around RM20,000 involved the building of a pipe connection 280 metres from the main source – a stand pipe with three taps supplying clean water.

Santubong alone has been allocated about RM685 million to build basic infrastructure projects and for programmes to eradicate poverty.

He reminded the people not to take the general election lightly as the future of the nation much depended on the result.

Wan Junaidi in his speech earlier hoped the development of Santubong would be on par with its counterpart Petra Jaya across the river (Santubong Bridge) within a decade.

“The people of Santubong aspire to enjoy development and progress like their counterpart’s,” he said.