Wednesday, October 20
You are at:Home»Business»BizHive»Asean and its unravelling integration dreams 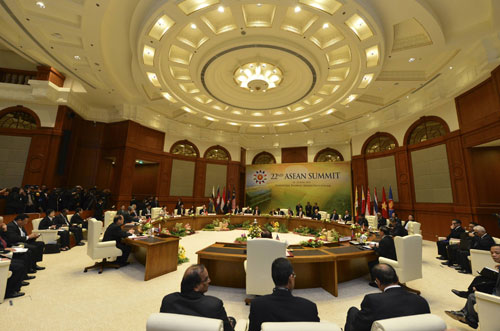 FINDING SOLUTIONS: Photo shows a general view of the retreat during the Asean Summit at the Prime Minister’s Offi ce in Bandar Seri Begawan. This past week while Spain’s unemployment rate inched past 27 per cent, leaders of the Asean nations met to hash out ways to keep the vitality of their own economic engines as antipodal as possible from that of derailed Europe. — Reuters photo

This past week while Spain’s unemployment rate inched past 27 per cent, leaders of the Asean nations met on April 24 and 25 to hash out ways to keep the vitality of their own economic engines as antipodal as possible from that of derailed Europe.

High atop the congregating leaders’ agenda was discussions surrounding the ultimate formation of the Asean Economic Community (AEC) in 2015, a topic largely overshadowed by the South China Sea dispute in media coverage.

Even more forgotten was just how challenging this economic dream had become.

During the 10-nation bloc’s 22nd summit in Brunei’s capital, Bandar Seri Begawan, it was revealed that the master architecture of the AEC – including its underwrote intentions of labour and trade liberalisation – might not be as feasible as previous hopes would suggest, its deadline looming only 18 months away.

Trying to shuffle together economies as disparate as Myanmar and Singapore, as sizeably distant as Indonesia and Brunei, was widely accepted as being a bold, Herculean attempt.

First off, Singapore, the undisputed beacon of technology and innovation in the region, has evidently detected an unflattering allure in other Asean nations, backtracking on one of the key tenets of the envisioned united community.

Reports have come in of Singaporean immigration police increasing detaining other Asean member citizens upon entry into the city-state – be it via air or overland.

Curbing of foreign worker inflows, traditionally a strong presence in the service-oriented economy, is a hypocritical action for a supposed proponent of economic integration.

Even for opportunistic expats escaping the crisis-ridden job markets of Europe, Singapore will no longer be as lovey-dovey towards the prestige of the white face; traditional expat packages are being scaled back by the government and labour rules are being tightened.

Over in Indonesia, the bloc’s heavy hitter in terms of economic output, a familiar song and dance are playing out.

Especially in recent years, Indonesia has become fiercely protectionist, banning the importation of a litany of agricultural products.

Three kinds of vegetables, cabbage, pepper and broccoli have also been banned, and tight quotes have been set for onion, shallott and garlic.

The anti-trade policies are understood to be in reaction to the country’s widening trade gap, which has yawned greater in the past years, weakening the rupiah, Indonesia’s currency, and thus burdening consumers and importing industries with higher costs.

The collateral damage from Indonesia’s ban has already been dealt, most severely to fellow Asean neighbours.

Thailand in particular has been hit by the durian import ban, as Indonesia is a large market for Thai durian, with an approximate a value of US$21 million of the fruit shipped to Indonesia each year.

Next down the list of the AECdesign offenders is Malaysia.

As the multicultural Southeast Asian nation prepares to head to the ballot box in an ‘historically close’ election, one of the major talking points of the manifestos being thrown up by competing political parties is the continued entrenchment of monopolies – colossal conglomerates that the AEC has specially targeted to counteract.

Malaysia is indeed lagging drastically behind its Asean partners when it comes to strengthening the country’s anti-trust laws, allowing greater competition for protected sectors, and thus greater economic competiveness and diffusion of wealth.

Two of the most protected sectors in the country remain to be the telecommunications and automotive industries, both with lobbying powers enough to put jitters in political pants.

The Asean bloc has done well to show observers that – despite their often vast differences – they have been successful at communicating, entering into dialogues and multilateral meetings often.

So ambitious have the members of this booming slice of the world been, that perhaps they have overshot their communal capabilities.

Standing shoulder to shoulder, Asean members may show a strong look of unity.

But behind the smiles and handshakes, predictably conventional barriers to integration will wedge them apart.