Tuesday, September 28
You are at:Home»News»Nation»Houseman posing as cop detained while robbing trader 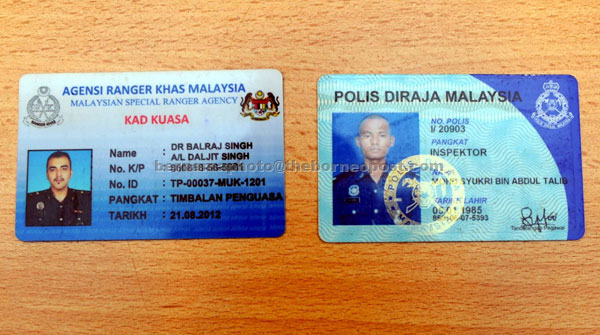 FAKE CARD: The warrant card of a police officer (right) and the fake Malaysian Special Ranger Agency card that was used by a doctor who impersonate a police officer when trying to rob a businessman. — Bernama photo 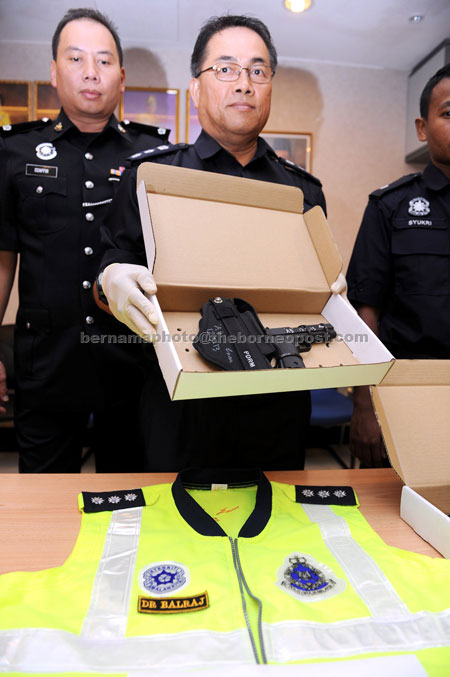 USED IN CRIME: Sum (right) showing the toy pistol and police vest used by the doctor during the press conference. — Bernama photo

IPOH: A houseman, masquarading as a policeman by wearing a transparent vest with the rank of an ASP and a toy pistol tucked in his waist, was nabbed by police when he tried to rob a trader, here, early on Sunday.

Ipoh police chief, ACP Sum Chang Keong said other than the doctor, aged 26, of Semenyih, Selangor, police also detained three of his friends, aged between 24 and 21, from here.

“In the incident at 4.25am, the first suspect who was driving his silver mercedez benz with three college students onboard, blocked a car driven by the victim, aged 30, in Jalan Datuk Onn Jaafar,” he told reporters, here, yesterday.

The first suspect opened the front door of the victim’s car to punch him on the chest and claiming to be a ‘CID police’ personnel by showing his alleged ‘authority’ card and flaunting his ‘pistol’.

He said the first suspect demanded RM350 from the trader to ‘settle’ or be taken to the Sungai Senam Police Station.

Meanwhile, one of the suspects had boarded the victim’s car to accompany him to a bank in Jalan Sultan Idris to withdraw money from an automatic teller machine but the machine was closed.

“The first suspect then demanded an additional RM100 after he became disappointed the machine could not be used.

“The victim wanted to seek the help of a friend but was disallowed. At that moment, a police patrol car arrived at the scene after being informed by the Pekan Baru Police Station about the case from a tip off,” he said.

He said all the suspects, who did not have criminal records, were detained until Friday and the case was investigated under Section 6 of the Firearms (Heavier Penalty) Act 1971.

The suspect had been a houseman at the Raja Permaisuri Bainun Hospital, here, for the past year, he added. — Bernama