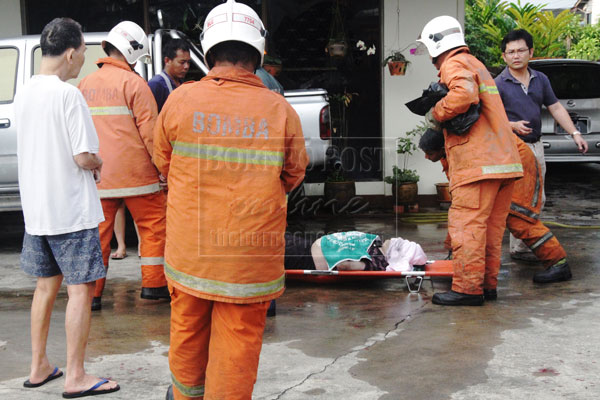 TRAGIC DEATH: Firemen taking a look at the body of the deceased at the scene of the fire.

KUCHING: The elder son of former state Forest Department director Datuk Leo Chai died after saving his elderly mother and young son from a fire which broke out at their house early yesterday morning.

Leonie Chai Kim Leung, 36, collapsed and died outside the family’s detached house at Star Garden near Green Road moments after leading his parents and eight-year-old son out to safety one person at a time.

His 71-year-old mother also collapsed after suffering shortness of breath following the 6.15am incident and was admitted to the Sarawak General Hospital (SGH) along with his son, who was similarly treated for smoke inhalation.

The elder Chai, who was also the former chairman of Sarawak Timber Association (STA), was unhurt in the incident.

The relatively small fire, which affected only a small section of the living room on the ground floor, was believed to have started after an air conditioning unit malfunctioned and set fire to a sofa set.

The flames spread quickly causing heavy smoke build-up in the house as all the windows and doors were shut at the time.

Immediate neighbours, including Hulu Rejang MP, Wilson Ugak, rushed over to assist the family upon learning what had happened.

One neighbour, a 32-year-old man, suffered a gash to his hand after he smashed a window to allow the thick smoke to escape.

Ugak, meanwhile, brought over a fire extinguisher from his own house and used it to control the flames from spreading to other parts of Chai’s house prior to the arrival of firemen.

The MP expressed his frustration at the apparent slow arrival of an ambulance from SGH, which he said took over 10 minutes to show up despite the relatively short distance between the hospital and Green Road.

“I called for an ambulance more than three times, and the reply each time was ‘on the way’. I suggest that ambulances be fitted with GPS to help the drivers locate the place more accurately,” he said in a text message to The Borneo Post.

Meanwhile, a spokesman for the Fire and Rescue Services Department said 10 personnel from the Batu Lintang fire station were dispatched to the scene after receiving a distress call at 6.23am.

“Firemen reached the location at 6.35am to discover one person had died, with a child and an elderly woman being sent to the hospital for breathing difficulties,” he said, adding the cause of the fire was being investigated.

It was learned that Leonie’s wife, who had given birth to their second child a month ago, was staying at her mother’s house.

Chai and other family members declined to comment about the incident.

KUCHING: The elder son of former state director of forest Datuk Leo Chai died of suspected smoke inhalation early this morning after saving his parents and young son from a fire at their house.

Leonie Chai Kim Leung, 36, collapsed outside the family’s detached house at Star Garden moments after leading his parents and eight-year-old son out to safety.

His 71-year-old mother fainted due to shortness of breath following the 6.15am incident and was admitted to the Sarawak General Hospital along with his son, who was treated for smoke inhalation.

Leo, who was also formerly Sarawak Timber Association chairman, was unhurt in the incident.

The fire, which affected only the living room on the ground floor, is believed to have started after an air conditioning unit malfunctioned and resulted in a sofa set catching fire.

The fire caused a heavy and rapid smoke build-up in the house as all the windows and doors were shut.

Hulu Rajang assemblyman Wilson Ugak Kumbong, who lives nearby, rushed over to the house after learning of the incident and used a fire extinguisher to control the flames from spreading prior to the arrival of firemen.