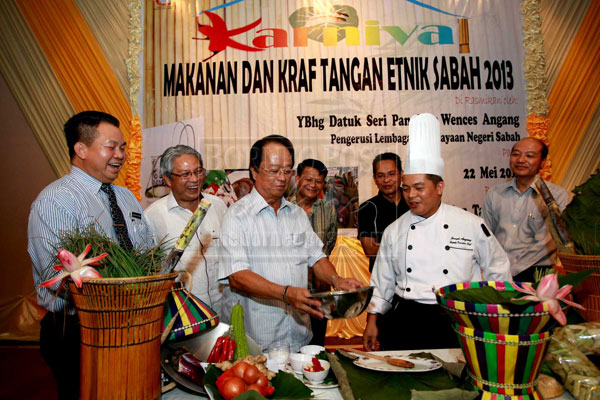 Angang (third left) preparing a local food in a symbolic launching of the Sabah Food and Ethnic Handicraft Carnival in Tamparuli yesterday.

The carnival which will end on May 25 is aimed at building up, promoting and preserving the cultures of Sabah.

“This year, we are combining the two programmes, which were held separately for the past few years, namely, the Traditional Food Festival and the Handicraft Fest, in this carnival to introduce the uniqueness of our food and handicraft to local and foreign tourists.

“As we all know, Sabah has about 35 ethnic groups with their variety of food and handicrafts. So this carnival will serve to assist all these groups to showcase what they have under one roof,” he explained.

A total of 12 ethnic groups will be participating in the carnival comprising, among others, the Dusun Lotud, Idahan, Irranun and Rungus, and various food exhibition booths have been erected in the community hall to showcase exotic foods like crocodile meat and also traditional food namely, Pinjaram, Kuih Sapit and Jala.

For the second day today (May 23), there will be the eating Pinjaram, Ambuyat and Butod competition and also handicraft contest which will be open to the public.

On the third day, eating traditional food and handicraft coloring competitions will be the highlight, while on the fourth day similar contests will be held until the prize-giving ceremony at 6pm.