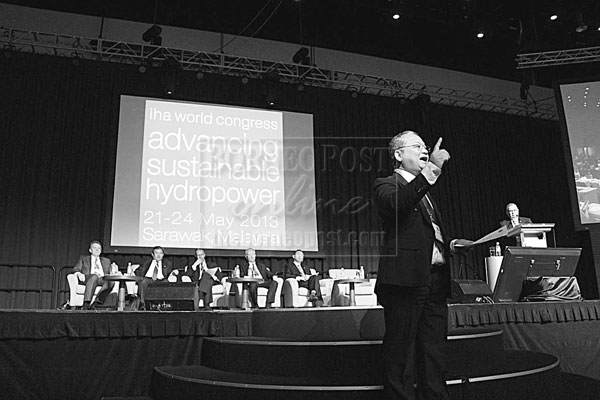 KUCHING: The International Hydropower Association (IHA) World Congress tasted controversy on the first day when its first plenary session was abruptly interrupted by a local non-government organisation (NGO) protesting against the construction of mega-dams in Sarawak.

Save Sarawak’s Rivers Network (SAVE Rivers) chairman Peter Kallang waited until the session was just about to close before standing to address the audience of 500 international delegates representing governments, developers, NGOs and other major hydropower industry interests.

The plenary session was meant to give an overview of key issues affecting the hydropower industry as well as set the tone of debates and discussions that will take place throughout the three-day congress.

Among those who had spoken earlier in the session were State Secretary Tan Sri Datuk Amar Mohamad Morshidi Abdul Ghani and Sarawak Energy Berhad chief executive officer Torstein Sjotveit, who watched silently from the stage as Peter spoke.

He informed the delegates of the 300-strong group of protesters gathered outside who could not enter the conference and expressed his disappointment that he himself was told to leave when he wanted to attend workshops held the previous day.

Peter said that for this reason the protestors would be holding an alternative conference which is scheduled to be held at a major hotel here today.

“All the delegates here and journalists are invited to come and listen to their side of the story. What Torstein and the state secretary are saying is not the full story,” he told delegates, who listened mostly in silence.

Peter alleged that the IHA congress in Sarawak was being used to ‘green wash’ the negative impact of the dams and human rights abuses that were taking place.

He reiterated the NGO’s demands that the state government and SEB halt all construction of mega-dams in the state and to uphold the principles of the United Nations Declaration on the Rights of Indigenous Peoples. Malaysia is among the countries which has adopted the Declaration.

He also demanded that the government resolve the outstanding problems at Batang Ai, Bakun and Murum.

Peter also urged the IHA not to support the promotion of Sarawak as a prime location for hydropower in light of the abuses of human rights and to kick out SEB from the association and Torstein as IHA director.

Although there was no Q&A session scheduled, Peter was allowed by the session chairman IHA president Dr Refaat Abdel Malik to finish saying his piece without interruption.

After finishing his speech, it was believed Peter left the hall immediately to join the group of protestors gathering outside.

When approached by reporters after the session, both Morshidi and Torstein refused to comment.

The IHA World Congress is organised with the support of the Sarawak Government. SEB is one of the main sponsors.

Previous ArticleWong Soon Koh: I’m alive and kicking
Next Article Auxiliary police told to adhere to proper use of firearms