Sunday, November 28
You are at:Home»Business»BizHive»Myanmar crosses the diplomatic Rubicon

It happened with just one word – the moment that analysts, observers and the plain curious have been waiting for. This past week, US President Barack Obama used the word Myanmar when meeting with the country’s president, Thein Sein, during his historic visit to the Washington DC, signalling that the once-pariah nation had indeed finally crossed the diplomatic Rubicon with the West.

As blithe as the US president’s use of the word may have been, it is a pronounced watershed in relations between the West and Asean’s weakest link that all neighbouring nations should take note of. In reality, its subtlety belies the cachet it carries: recognition of the dramatic progress Myanmar has made from rogue to reformist, and the US in its continued ambitions to wedge Asean away from China’s orbit.

Previously, the name Myanmar was considered taboo by the US, which omitted it from formal lexicons to avoid condoning the former ruling military junta, an oppressive regime that renamed the country from Burma in 1989, the same year opposition leader Aung San Suu Kyi was first put under house arrest for inciting protests for democracy.

UK media in particular have been perked up by Obama’s choice. Using Myanmar is still abhorred by human rights activists, who President Thein Sein certainly could not miss seeing as he made his way into the White House.

So why use it now? According to the White House press secretary, Jay Carney, the use of Myanmar does not represent a shift in policy, but was done as an act of courtesy for the visiting head of state, and is acceptable to use in such contexts. Flip the word from ‘courtesy’ to ‘charm’ you’ll find yourself a little closer to the subtext. 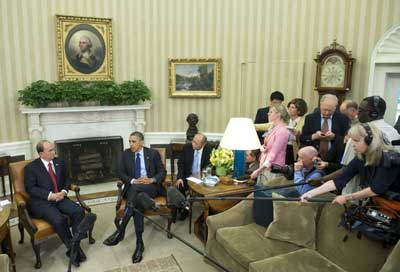 While the US still forbids imports of ruby and jade from Myanmar, as well as doing business with military-owned companies, the country has vast population that could one day grow into active consumers and, more strategically, acts as a land bridge between China and India.

The Myanmar rush has, however, already been heralded. General Electric became the first US company to commit to investment into the newly opened economy after sanctions were widely lifted in mid-2012; the likes of Ford, Heineken, Tiger, and the Marrybrown restaurant franchise have also inked their intent to establish a presence, often through local firms.

This represents only a trickle so far. But before President Thein Sein left the US capital, he managed to nudge on further cooperation. A member of Thein Sein’s delegation, Myanmar’s deputy commerce minister Dr Pwint San, signed a Trade and Investment Framework Agreement with acting US Trade Representative Demetrios Marantis. The agreement called for the US and Myanmar to identify business initiatives that support ongoing reforms and development projects that benefit the Myanmar people, including the poorest.

Despite its reforms, Myanmar still poses critical internal security risks that have demonstrated time and again to be destabilising forces for its neighbours as well. With Thein Sein standing next to him, Obama maintained that communal violence against ethnic Muslim Rohingyas must come to end, an issue that even the lionised and idolised Suu Kyi has faltered with. Furthermore, there are ‘spoilers,’ as Thein Sein calls them, within the ranks of the old government that hold entrenched interests.

Perhaps a sign of Myanmar’s resilience and genuine foreign interest, this chaos doesn’t seem to be tarnishing business sentiment in Yangon yet, as multi-national corporations have continued plying into the commercial hub, driving real estate prices for undersupplied premium serviced apartment (there are only six) to the same levels as Los Angeles.

This is the Myanmar’s true jewel. If Thein Sein can continue to convince the world that his country has whole-heartedly acted on the reformist epiphany it had in 2011, then global interest will remain piqued and as ever curious to how history develops, no matter what its called.