Thursday, July 7
You are at:Home»Features»No room for slackers after big pay rise 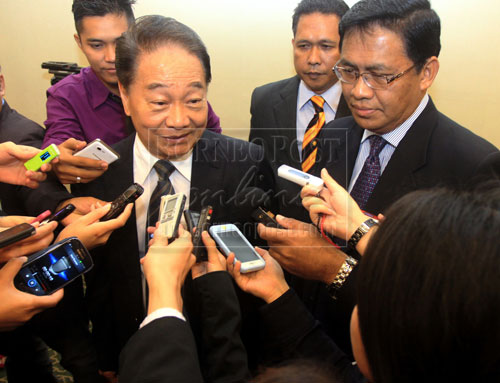 BRIEF EXPLANATION: Wong giving an impromptu interview on the pay hike for Sarawak ADUNs and members of the state administration.

THE newly-elected state assemblemen and women gave themselves a big pat on the back by acceding to a huge revised pay hike of 200 per cent at the on-going sitting (May 20 to 29) of the State Legislature.

The YBs reviewed their own salaries and other benefits after the Members of Administration and Members of Dewan Undangan Negeri (Remuneration, Pension and Gratuities) Bill, 2013, tabled by Second Finance Minister Dato’ Sri Wong Soon Koh, was passed on May 21 – the second day of the sitting.

A reviewed pay rise of such a high per cent for the elected representatives and Cabinet members means an additional spending of RM17 million annually – retrospective to the beginning of 2012.

Justifying the adjustment, Wong who is also Local Government and Community Development Minister, said it was needed “to commensurate with the status and responsibilities in the society of the elected representatives, considering the current rate of inflation, standard of living and other relevant factors such as the vast geographical coverage, challenging terrain, logistics and risks involved in serving their constituencies.”

A comparison of remunerations of elected representatives, cabinet members, deputy speaker, speaker and assistant ministers before and after the passing of the Members of Administration and Members of Dewan Undangan Negeri (Remuneration, Pension and Gratuities) Bill 2013. A rough comparison is also made between Sarawak and Sabah’s State Assemblies.

Wong deemed the new scale as being in line with those of the other Malaysian states as well as the neighbouring countries but not with more developed countries such as Singapore.

In the case of Singapore, he said the monthly salary of MPs in the island republic is RM38,312 while the Prime Minister Lee Hsien Loong is paid RM439,000 (per month) compared to Chief Minister Pehin Sri Abdul Taib Mahmud’s RM39,000.

It is a natural reaction for various quarters to compare the new pay scheme with the previous one as well as the salaries of our state assemblymen and women with those in the other states and the neighbouring countries.

Where comparison is concerned, perhaps what comes to mind first is Sabah since it is nearest Sarawak and probably also has the most in common with our state.

Before the massive jump in pay, Sarawak ADUNs and Cabinet members were paid more or less the same as their Sabahan counterparts.

With the increment, however, the Sabah State Assembly is expected to have a hard time catching up with its Sarawak equivalent in terms of hugely better pay for its YBs.

Sabah YBs’ present pay is based on the outcome of a revision carried out about four years ago (July 2009) – (See Table, Sabah section).

Even so, the scale is only on par with the unrevised salary scheme for Sarawak’s State Assembly members.

After the adjustment, Sarawak’s YBs are getting at least three times more than their counterparts in Sabah unless the latter decide to have a similar pay rise of 200 per cent.

For now, it does appear Sabah’s elected representatives will have to do with less in serving their constituents.

The validity of such a comparison is, of course, the subject for another discussion but there is obviously a difference between the earnings of a state assemblyman (woman) and a parliamentarian since the scope of responsibility of the former involves only the affairs of one state whereas the latter’s involves a nation. 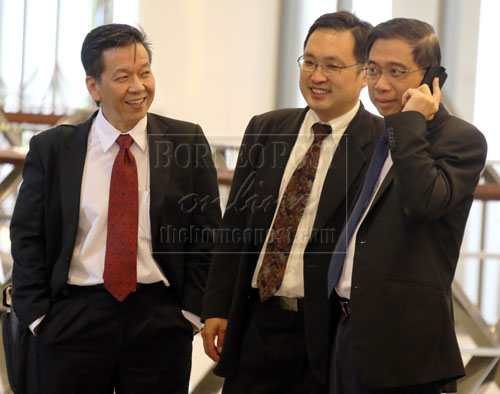 NO OBJECTION: Opposition YBs did not object to the pay rise of more than 200 per cent. (From left) David Wong (DAP-Pelawan), Chong Chieng Jen (DAP-Kota Sentosa) and Wong Ho Leng (DAP-Bukit Assek).

The State Assembly’s unanimous consent for the YBs’ increment meant there was no objection from the opposition bench.

First, all members of the administration must declare their assets and secondly, they and their immediate family members should be refrained from involving in any government projects or the delineation of state land.

Chong’s views were echoed by a young executive, Norman Wong, 26, who opined: “Should the comparison be made with other countries, then practices from these countries should also be considered where when one is in a position of political power, all stakes in any companies should be relinquished to prevent the misuse of the political power for personal gain.

“And even if the ministers want to keep the position in the company, all monetary gains – be they director’s fees or salaries – should to be accounted for and published for public knowledge since the ministers are also representatives of the people, hence giving the people the right to know what their representatives are doing.”

State PKR chairman Baru Bian (PR-Ba Kelalan), while agreeing with Chong, pointed out that for YBs, who (like himself) are serving a remote and hilly constituency, the increased allowance will enable them to employ assistants and set up service offices or centres in inaccessible areas such as Baram and Lawas (where his constituency is located).

Even Baru’s colleague, See Chee How (PR-Batu Lintang) whose constituency is in an urban area, lamented that the previous salaries and allowances of elected representatives were not enough, especially for those from the opposition who, he claimed, were not entitled to any development funds or allowances.

The financial stress is mainly on running the service office or centre which is needed to provide a platform for the constituents to reach their elected representatives.

“For me, I have two full-time staff to help me run my constituency. The total cost of operating that office alone is RM200,000 to RM300,000 per year. And I’m in town area. Imagine those YBs who are serving in rural areas – how much more do they need to service their constituency efficiently?” See queried. 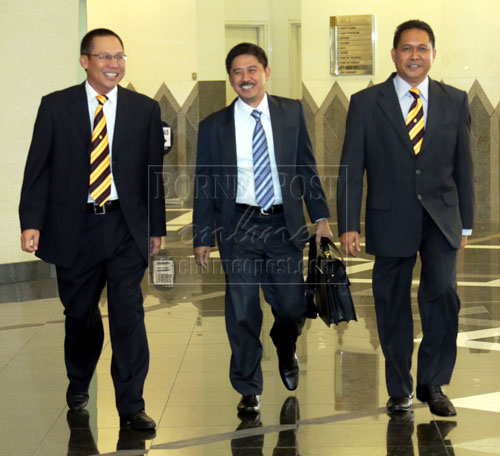 SMILES ALL ROUND: Three YBs – backbencher chairman Abdullah Saidol (left), Ripin Lamat (centre) and Aidel Lariwoo – continue to maintain their political secretary posts even after elected. This will rake in an additional income of RM9,000 for them after the salary adjustment.

Details of perks and benefits to be known on Monday

The previous salary scale for the ruling party’s backbenchers (elected reps without any Cabinet portfolio and not appointed as assistant ministers, speaker or deputy speaker), had not been all that impressive either.

Their monthly income was RM8,000 comprising a basic salary of RM4,500, and a RM3,500 allowance which included travelling expenses, phone bills and other expenses incurred while serving their constituents.

In view of the geographical terrain and size of Sarawak, it is generally felt that RM8,000 is too little for a backbencher from both the ruling party and the opposition to serve their areas efficiently.

It is, therefore, understandable for associate professor Dr Andrew Aeria from the Department of Politics and International Relations at University Sarawak Malaysia (Unimas) to hold the view that the pay rise for backbenchers is justifiable. 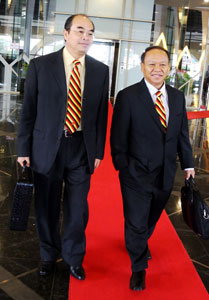 “They should be paid sufficiently so that they can be effective in serving their constituents as there is a lot to do if they are serious about their roles.

“I’m saying this because there are also YBs who are not serious about serving their constituents. The people hardly see them. They are YBs in name only. For this kind of YBs, they don’t deserve the increment at all,” he pointed out.

Some backbenchers prefer to maintain their position as political secretaries after being elected as state assemblymen (women).

With the new salary scheme, a backbencher representing a rural constituency receives RM22,500 per month which includes a basic salary of RM15,000 and a service allowance of RM7,500.

For the urban backbencher, the basic salary remains at RM15,000 but the service allowance is RM5,000.

Before the salary adjustment, backbenchers’ benefits included a RM150,000 interest-free loan for housing; RM30,000 interest-free loan for car; RM50 per day meeting allowance (in lieu of subsistence allowance which is also RM50 per day); hotel entitlement of RM150 per day while on official duty; computer loan of RM5,000 or 90 per cent of the price of the computer; an approval permit (AP) for a foreign car and exemption of excise duty for a local car as well as free medical care at any government hospital and Normah Medical Centre.

Following passage of the Members of Administration and Members of Dewan Undangan Negeri (Remuneration, Pension and Gratuities) Bill, 2013, the benefits of all backbenchers are expected to be improved.

The details will only be revealed next week at the State Assembly sitting. 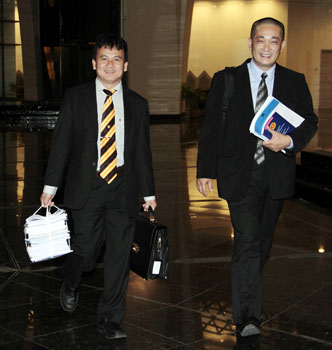 PAY HIKE: After the salary adjustment, Ali Biju (PKR-Krian – at left) as a rural backbencher will receive RM22,500 per month while See Chee How (PKR-Batu Lintang) will be paid RM20,000 as his monthly salary.

In addition, the assistant minister was given RM3,000 as fixed allowance for housing (if he was not staying in government quarters) and RM2,000 as fixed entertainment allowance.

All his travelling expenses, including transport and accommodation, were borne by the ministry he was serving which also took care of his phone and electricity bills.

Moreover, the assistant minister was entitled to a maid or a servant, a driver and a garderner.

With the reviewed salary scheme, not only YBs with appointments will enjoy a big pay hike, their housing and entertainment allowances are also expected to be doubled.

Details pertaining to the benefits of backbenchers, those with portfolios, the deputy speaker and the speaker will only be revealed  on Monday at the on-going State Assembly sitting.

Understandably, this will trigger another round of discussions among taxpayers who are the ones footing the bill. 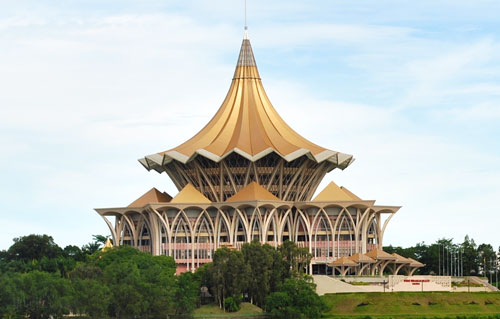 GREAT PERKS: The State Assembly sitting reviewed the salaries and other benefits for the elected representatives after the passing of the Members of Administration and Members of Dewan Undangan Negeri (Remuneration, Pension and Gratuities) Bill.

The fact that RM17 million will be incurred annually for the pay rise of the 72 state assemblymen in Sarawak — of whom there is one chief minister, one deputy minister, three senior ministers, five full ministers and 19 assistant ministers – is likely to remain a hot topic in town.

Some argue a pay hike of over 200 per cent after 21 years of stagnant remuneration is reasonable while others say the revision for backbenchers is acceptable but the huge amounts drawn by those holding appointed posts is “simply outrageous” in view of present economic situation.

One thing that almost all will agree on is that as long as the YBs – be they assistant, full or senior ministers or chief minister — serve the people who elected them with diligence, sincerity and dignity, the taxpayers are willing to foot the bill.

But if these honorable members fail to honour the trust, hopes and expectations the people have placed in them to provide efficient service and assistance during their tenure but are only looking after their own interests while ignoring the needs of their constituents, then even paying them a dime can be considered an overpay!