Tuesday, January 25
You are at:Home»News»Sarawak»Man’s body found in parking lot 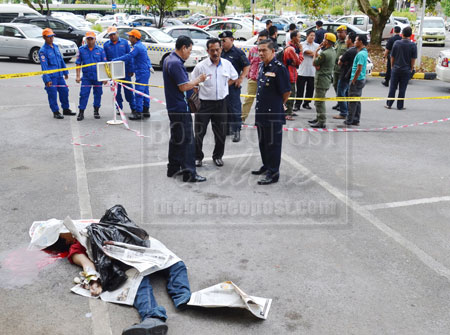 FATAL PLUNGE: Pauzi (right) listens as a policeman records Sapar’s statement at the scene of the incident.

The man is believed to have fallen to his death at around 7.15am just as staff from various government departments were arriving for work.

District police chief ACP Roslan Bek Ahmad said police have yet to identify the victim, who looked to be in his 30s, as no personal documents were found on the body. He revealed that initial investigation indicated no element of foul play involved in the death, adding the deceased’s fingerprints have been sent to the National Registration Department in a bid to establish his identity.

A guard from the building’s maintenance department, Sapar Uji, 49, told reporters he was having his morning tea at the canteen on the ground floor when he heard a loud thud outside.

“I rushed out thinking a motor accident had occurred, but arrived to see the body of a man – clad in jeans and shirt – sprawled on the parking lot,” said Sapar, who arrived for work around 6.30am.

Another staff member later disclosed that a check of the building’s closed-circuit television (CCTV) recording showed the victim exiting the elevator on the 15th floor, although it was unclear if the fatal plunge occurred there or on another floor.

Meanwhile, a security guard stationed at the rear entrance of the building’s compound said the deceased showed up on foot slightly before 7am and walked directly towards the building.

“He stopped midway and went over to a small drain and vomited before continuing to walk towards the building. I thought he was either drunk or unwell and did not think about it further,” he said.

A police team, headed by deputy district police chief Supt Pauzi Bujang, was present at the scene to investigate the incident, and later transported the body to the Sarawak General Hospital for a post-mortem. The case has been classified as sudden death pending further investigation.

Prior to yesterday’s incident, the last fatal plunge to occur at Bangunan Sultan Iskandar took place in August 2010, when a retired civil servant fell to his death from the 17th floor of the building.