Monday, January 24
You are at:Home»News»Sabah»Tawau to have sister-city partnership with Zhangping City 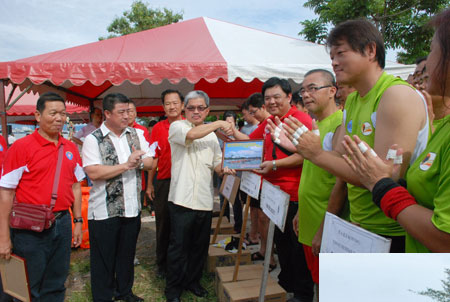 Liew presenting an appreciation memento to every participating team.

TAWAU: China’s Fujian Province Zhangping City municipal council will hold a study visit to Tawau at the end of June and a ‘sister-city’ partnership will be tied up for economic development between both places.

Commanding officer of the 516th Regiment Territorial Army for east coast of Sabah, Brigadier General Tan Sri Liew Yun Fah, said such ‘sister-city’ partnership would not only boost the economic sector but also develop a closer relationship between Tawau and China.

Liew said it would be a good platform for business dealings, with huge foreign investments for Sabah, especially for Tawau.

He said this when officiating at the 29th Dragon Boat Race 2013 at Jalan Pesisiran, Sabindo here yesterday morning. It is an annual program held by the Tawau Federation of Chinese Associations (TFCA) in conjunction with the Dumpling Festival.

Meanwhile, TFCA would also hold a study visit to Changzhou, China in mid June and would possibly attend the China Flower Fair on September 28.

“The power of unity among the Chinese community is very important for the betterment of Tawau. I hope the Tawau Chinese Chamber of Commerce can play their roles in generating more business opportunities in Tawau,” Liew said.

“Chan should utilize his power wisely in solving the needs and problems of the people. He should work together with leaders of Barisan Nasional (BN) in overcoming the three main issues – water, electricity and road – faced by the Tawau residents over the years.

On a separate matter, Liew said he was going to bring along bosses from China Power Plant Company to pay a courtesy call on Sabah Electricity Sdn Bhd (SESB) in Kota Kinabalu to solve the electricity problem in Sabah.

Yong said it would be a ‘bridge’ for all nationalities in terms of cultural exchange and unity.

There were three categories in the dragon boat race. For the Chinese category, the championship went to Sandakan TongKang Association while the second prize went to Tawau Sunday Hash and third went to Junior Chamber International (JCI) of Tawau.

For the mixed category, the championship was won by Tawau police while the second and third prizes went to Tawau Sunday Hash and Sandakan TongKang Association respectively.