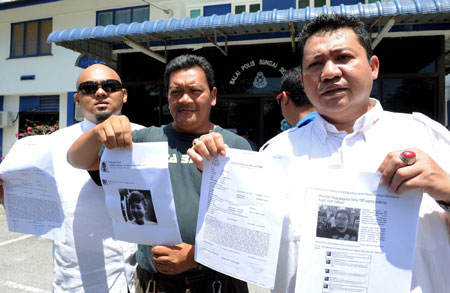 Umno Youth chief Khairy Jamaluddin said the act of abusing the freedom to write in social media cannot be compromised and action should be taken if it goes beyond bounds.

“Umno Youth takes a serious view on some posts on social media, especially in Facebook. The latest was a posting that insulted the position of the Yang di-Pertuan Agong.

“Even I support freedom of speech but there is a limit and responsibility,” he told reporters after visiting the Johor Youth and Sports Complex in Larkin, here, yesterday.

He said peace and respect can be maintained if the country’s existing laws under MCMC can be enforced without fear.

“We’ve been trying various ways to educate them, communicating with them but if they are still stubborn and post statements that are clearly seditious, then MCMC must step in and act,” he said.

Meanwhile, in Ipoh, 20 non-governmental organizations (NGOs) yesterday filed a police report at the Sungai Senam Police Station at 1pm on two individuals who had allegedly insulted the Yang di-Pertuan Agong on their Facebook and Twitter account on Monday.

A man had allegedly used his twitter account ‘twithandle @10Befiend’ or known as Effi Obefiend to belittle the Yang di-Pertuan Agong while on Facebook, an account owner known as Melissa Gooi issued a statement that was detrimental to the speech of the King.

“They should be stripped of the country’s citizenship. If no action taken, their rudeness will interrupt and threaten the peace and racial unity in Malaysia,” he added. — Bernama