Tuesday, September 28
You are at:Home»Business»BizHive»The future of hydropower in Sarawak

With its appetite for energy spurred by heavy industries via the Sarawak Corridor of Renewable Energy (SCORE), Sarawak is in the market to search for more energy sources.

As options are sought to fulfill these needs, power generation through hydropower has been identified as the catalyst to drive and accelerate socio-economic growth in the state.

Indeed, Sarawak is deemed the ‘perfect candidate’ for hydropower solutions, given its high volume of rainfall and elevated topography.

Such was the notion brought forward at the recent International Hydropower Association (IHA) Conference held at the Borneo Convention Centre Kuching.

“As well as the initial foreign direct investments (FDIs), these new industries create sustainable high-income jobs for locals as well as develop other sectors such as the service industry, property, education and health,” he told BizHive Weekly.

Based on statistics provided by the government, Sarawak currently has a population of 2.5 million and is estimated to increase to 4.6 million in 2030 as a result of SCORE.

The ‘organic’ demand for electricity from traditional customers paying domestic and commercial tariffs is now around 900 megawatts (MW).

“From this base, the state is poised to reach 8,000 megawatts (MW) in the future (6,000MW projected to power SCORE’s full potential and 2,000MW to power residential retail and commercial sector in 2030),” Torstein disclosed.

To build a sustainable energy platform for growth, Sarawak needs to manage its heavy reliance on fossil fuels. Given such asituation, the state should instead move towards cleaner power generation and simultaneously intensify the development of renewable energy (RE) as the fifth fuel resource.

With greater worldwide awareness on carbon mitigation measures to combat greenhouse gases (GHG) emissions, there are now more concerted efforts to promote and encourage the use of renewables for power generation. And in the Malaysian context, the government approved The National Renewable Energy Policy and Action Plan on April 2, 2010.

All these factors point to shifting to a more sustainable energy supply which is readily available, economical to produce, renewable and non-polluting. The push for this shift appears to come increasingly from the tremendous potential of hydropower to generate electricity.

History of hydropower in the state

In 1962, a first overview of the hydropower potential of Sarawak was made by Australian engineers under the Colombo Plan Programme.

“Based on our study and review, Sarawak has a potential hydro energy of 20,000MW of clean electricity with total energy output of 87,000 Hwh per year,” State Secretary Datuk Amar Mohamad Morshidi Abdul Ghani said at the conference.

“Our first foray into hydropower at Batang Ai began in 1975 before the design was published in 1977.

“Construction started in 1982 with the river diversion work and the last turbine completed in 1985, supported by financing from the Asian Development Bank. The installed capacity at Batang Ai is 108MW,” he added.

Morshidi noted that more recently, the government had started taking power from Bakun – built and operated by the national government – back in 2011.

The first four machines were commissioned and Are now delivering about 700MW. The remaining units will be commissioned over the next 12 months, achieving the plant’s full capacity of 2,400MW.

Gearing up for SCORE

The state fully realises an opportunity has opened up in the current world market configuration where aluminium smelters and other such industries are looking to establish themselves to low cost, abundant renewable energy sources – without having to rely on the ever costly fossil fuels and coal.

Each aluminium smelter requires about 600MW of power. Without the energy capacity of the Bakun dam, the state’s total electricity production capacity is 1,315MW. As such, it would be impossible to attract such industries without the support of hydropower.

The SCORE project is the catalyst to spearhead the growth of this sector and facilitate the location of such industries in Sarawak, which, in turn, will stimulate the business and investment environment and allow the state to industrialise quickly and create high-income employment opportunities.

Hydropower as compared to most forms of energy generation has the major advantage of eliminating the cost of fuel. 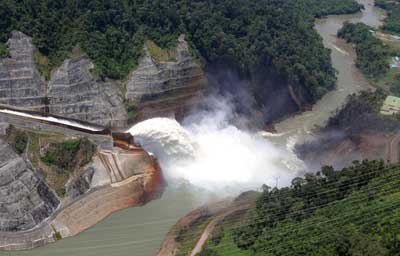 According to Bloomberg New Energy Finance annual volume, Sustainable Energy Handbook (2013), natural gas, coal, nuclear and hydro remains the cheapest sources of energy with hydropower being the only renewable energy from the lot.

Fossil fuels reserve is expected to be depleted in the next 30 to 40 years based on data founded by University of Tenaga Nasional (UNITEN).

The cost of operating a hydroelectric plant is nearly immune to increases in the cost of fossil fuels such as oil, natural gas or coal.

Hydroelectric plants also boast long economic lives with some plants still in service after 50 to 100 years, as well as low operating labour cost as the plants are automated and have few personnel on site during normal operation.

Where a dam serves multiple purposes, a hydroelectric plant may be added with relatively low construction cost, providing a useful revenue stream to offset the costs of dam operation.

While many hydroelectric projects supply public electricity networks, some are created to serve specific industrial enterprises.

For example, dedicated hydroelectric projects are often built to provide the substantial amounts of electricity needed for aluminium electrolytic plants.

Since hydroelectric dams do not burn fossil fuels, they are claimed to not directly produce carbon dioxide. While some carbon dioxide is produced during manufacture and construction of the project, this is a tiny fraction of the operating emissions of equivalent fossil-fuel electricity generation.

Hydropower can be a powerful engine for economic growth, especially when linked with industries that seek low carbon energy supply.

Inside Investor note that with more dams coming online, there is a potential for independent power producers (IPPs) in Sarawak to go into direct power production as a further economic contribution to the state. This is also a step forward – in the right direction.

SEB’s Sjotveit also said right now, energy is the only path to growth and prosperity – a point proven to be valid globally as noted by some participants who spoke on energy poverty equates to economic poverty at the IHA.

For Sarawak, the power created from the dams will be used to prepare the state for its energy future as well as a catalyst to lure heavy industries to further boost the state’s economic abilities.

On the global front, Yan Zhiyong, vice president for China’s Society for Hydropower Engineering (CSHE), said the expansion of sustainable energy, especially in Hydropower, was pivotal for the country’s expansion and was underscored in the Chinese Twelfth Five Year Plan.

“By 2020, the total installed hydropower capacity in China will reach 420 gigawatts (GW), including pumped storage,” he stressed.

“There are three major issues of importance in dealing with hydropower – resettlement of populations in a people-centred manner, accurate analysis of ecological and environmental impacts as well as measures for project safety.”

Arthur Mynett from UN Education, Scientific and Cultural Organisation for Water Education (UNESCO-IHE) stressed the importance of a strong knowledge base to advance the field of water management and noted the work UNESCO-IHE was undertaking in this regard.

“At the moment, 70 per cent of the world’s fresh water is used for agriculture and meeting this demand will be a challenge in the context of population growth and climate change,” he explained.

Jean-Michel Devernay from the World Bank elaborated on key areas for continued progress for the sector such as strengthening of integrated planning, paying more attention to long-term sustainability, ensuring connections between hydropower and the larger development agenda as well as becoming more creative when designing models to leverage significant financial resources.

Keeping in mind that most hydropower dams were built during the 60’s and 70’s, the short life cycle of electronics often makes it problematic to source spares. New environmental demands also drive modernisation.

According to Wolfgang Semper, chairman for Hydro Equipment Association (HEA), modern hydropower entails a range of things, including new forms of equipment for a variety of situations, new features in the plants as well as innovative approaches to new technologies.

Roy Adair, chief executive director for Hydro Tasmania, added to this sentiment by stating that “the electricity market has changed and that hydropower is required to meet new challenges and hydropower’s flexibility is also the key to its durability.”

They all concurred, however, that ‘modern hydropower’ added on a new element to be considered with increased awareness of the communities, affected by the project, and that the consequences for local community societies, the importance of stringent rules on relocation and the responsibility to local communities, needed to be addressed thoroughly.

While previously water management did not focus on environmental sustainability, due to the ever-changing landscape of the hydropower industry and the increase in awareness, Viraphonh Viravong, Vice Minister of Mines and Energy of the People’s Democratic Republic of Lao, noted that “in some cases, long-term sustainability and short-term economic development must be traded against each other.”

He called for improved assessment tools to assist project proponents in ensuring sustainability.

“Hydropower presents a unique challenge because the impacts of present decision takes years to become evident,” he said.

From all these, Sarawak still needs to meet the challenge of measuring sustainability, the need for biodiversity offset to be paid by the sector, the cost of social and environmental within the lifetime of the project as well as the need for more dialogue with communities, companies and governments to define sustainability at the local level.

Mohamad Irwan Aman, from SEB, explained how SEB was embedding the Hydropower Sustainability Assessment Protocol (HSAP) into their core operations, including the planning and implementation of projects.

He concluded by presenting SEB’s trajectory on the “journey towards sustainability,” underscoring that, despite challenges, genuine efforts were being made to improve performance.

Pablo Cardinale, IFC, emphasised that “development that is not sustainable is not development at all.”

In that context, he suggested the protocol was a useful tool for promoting sustainability and identified four enduring challenges – informed communication between all stakeholders; cumulative impact assessment and management; engagement of indigenous peoples; and cross-cutting issues related to stakeholder engagement and negotiations.

The importance of the Hydropower Sustainability Assessment Protocol (HSAP) to the future of sustainable hydropower can not be stressed enough as the protocol is no longer just a standard for the industry but also a standardised measurement tool.

Philipp Hauser,from GDF SUEZ Energy, Latin America, drew on the example of the Protocol in the context of the Jirau Dam in Brazil and suggested that emerging uses related to the Protocol should include promoting competitive advantage; responding to non-financial and sustainability ratings; providing a due diligence tool; increasing sustainability in early project development and building relations with institutions.

Kate Lazarus from the IFC, shared her experiences in applying the protocol, underscoring testing in pilot cases and using the protocol to build constituents for improved hydropower governance in the Mekong region. This, she said, was leading to the protocol’s greater use.

“Taking a river basin approach in trans-boundary situations is important and the protocol can be used synergistically with the IFC Performance standards, making it a globally synchronised tool to further measure the sustainability fo the hydropower front for the project anywhere in the world,” Lazarus
explained.

Noting that the Protocol has been translated into other languages, AF Consult’s Bernt Rydgren said the Protocol brought enormous potential to improving the sustainability performance of the hydropower sector, and could be used in other types of work with hydropower companies.

With such positive sentiments towards the protocol from hydropower players worldwide, Jian-hua Meng, from the World Wildlife Fund (WWF), called for wider endorsement of the Protocol, saying “the WWF is in favour of promoting the right infrastructure solutions in the right places. Market transformation is necessary to help move the hydropower sector towards better and sustainable practices.” 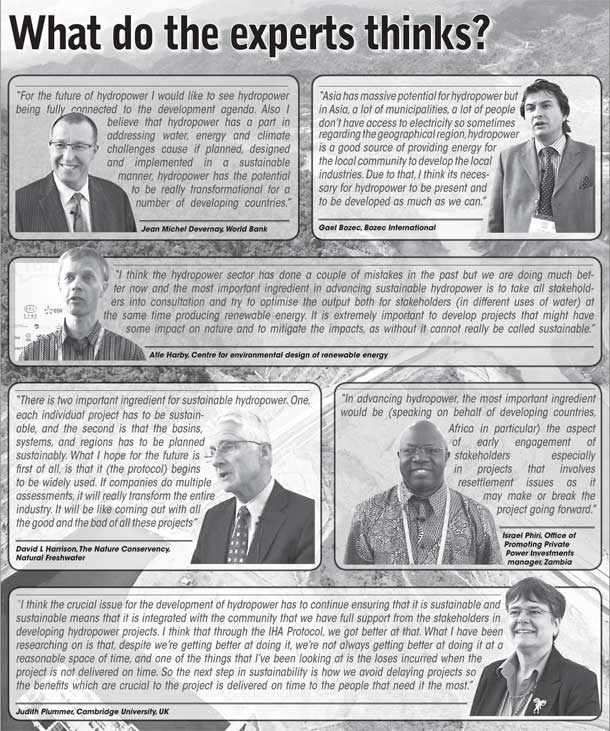