Thursday, July 7
You are at:Home»News»Nation»Durian yield in Balik Pulau drops due to wet weather 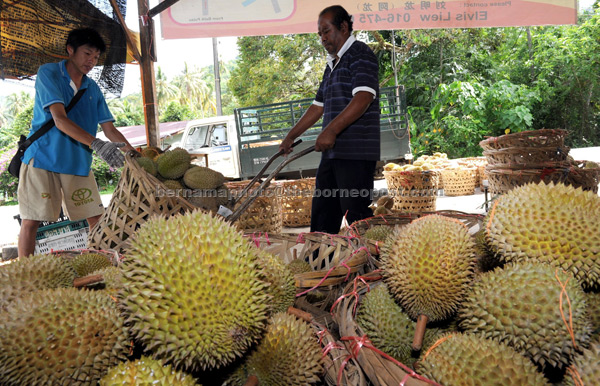 LOWER HARVEST: Some of the workers collect the durians at 1818 Durian and Fruit stall in Balik Pulau. – Bernama photo

GEORGE TOWN: The wet weather since early this year has resulted in the yield of durians in Balik Pulau, here, to drop this year.

The owner of 1818 Durian and Fruit Dealer store in Balik Pulau, Elvis Liew Min Long said the weather condition was uncertain and the rainy season early this year had resulted in fewer durians.

“The usual yielding period for durian is during the middle of April but the uncertain weather has caused a delay in the durian season to May 15, this year,” he told Bernama here yesterday.

He said during the usual durian season, he would collect between 40 and 50 baskets a day from about 40 planters but now the collection was only 30 baskets a day.

“It takes between 90 and 120 days in a blooming season that begins in January and April but this year, it was affected by the weather,” said Liew, whose family has run the durian trade for the past 40 years here.

Liew said he supplied the durians to sellers from various places such as Yan, Taiping, Kuala Lumpur and Muar.

“Usually in the morning, we will arrange the durians that come from the plantations for sellers and we also welcome customers who visit our store here during the afternoon,” he said.

He said among the highly sought after durians were the Musang King, Little Red, Hor Lor and Red Prawn.

In conjunction with the durian season, the state is organising the Durian Festival 2013 at Anjung Indah, Balik Pulau, which is being held until July 30. — Bernama