Sunday, September 26
You are at:Home»News»Sarawak»‘All govt agencies must register with Socso’ 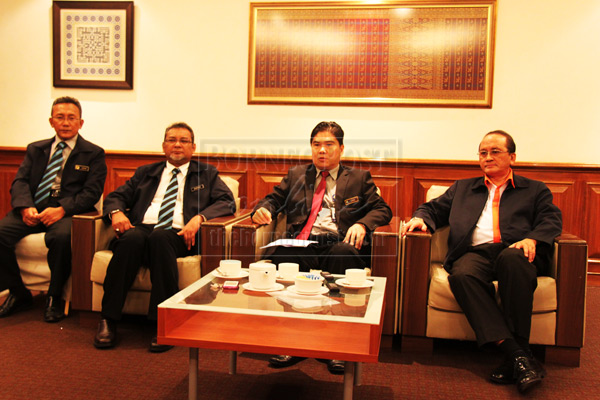 NEW PROTECTION SCHEME: Riba (second right) explains the new Socso scheme which allows contribution from civil servants employed on a temporary and contract basis beginning June 1 this year. With him (from left) are Hassim, Borhan and Mohd Noh.

KUCHING: All government agencies have been reminded to register with the Social Security Organisation (Socso) to enable them make contributions for their temporary and contract employees.

In a briefing on its new protection scheme yesterday, Socso state director John Riba Marin said under the new scheme enforced beginning of this month, all civil servants employed on a temporary and contract basis earning RM3,000 or less monthly are eligible to contribute to Socso.

He added that the new scheme, gazetted on May 28 this year, will also benefit employees of local councils and statutory bodies.

With the new scheme, civil servants will be able to enjoy the same benefits as workers in the private sector provided by Socso – namely, the Employment Injury Scheme and the Invalidity Scheme which covers invalidity pension, education benefits and survivor’s pension.

“The main objective of the briefing is to inform Sarawakians that as of June, all temporary basis and contract basis civil servants will benefit from Socso protection scheme. This will give them better social security on par with employees from the private sector.

“This is one of Socso’s initiatives to expand its protection scheme to employees who deserve adequate protection as workers. The scheme not only covers contributors from occupational hazards but also benefits their next of kin in the event of fatality,” Riba told a press conference after the briefing held at the Riverside Majestic Hotel here.

Riba also pointed out that workers who have been contributing and are now earning a salary of more than RM3,000 per month are required to continue their contribution in line with the principle that ‘once you are eligible, you continue to qualify for contribution’.

However, he said, they are only eligible if they and their employers agree to be covered under the Socso scheme by submitting the option notice along with workers registration form.

On another note, he disclosed that as of March this year, the state had a total of 32,977 employers actively contributing to the scheme, out of which 14,367 were from Kuching.

Nationwide, Socso had paid out about RM1.7 billion in 2011 and RM2 billion last year in compensation, he added.

On the high number of accident reports, Ribas said it was mainly due to the increase in road accidents.

“Based on statistics, work-related accidents recorded only a slight increase,” he explained.

Meanwhile, Borhan explained that temporary and contract civil servants were previously exempted from contributing to Sosco because the government had its own policy on social security.

Even with the new regulations, permanent civil servants are still exempted from making Socso contribution, he said.

Previous ArticleErrant customers will be brought to court — Sesco
Next Article Lee: Haze in Miri easing with no hot spots or open burning