Monday, May 23
You are at:Home»News»Sarawak»Close shave for couple when durian tree falls on house roof 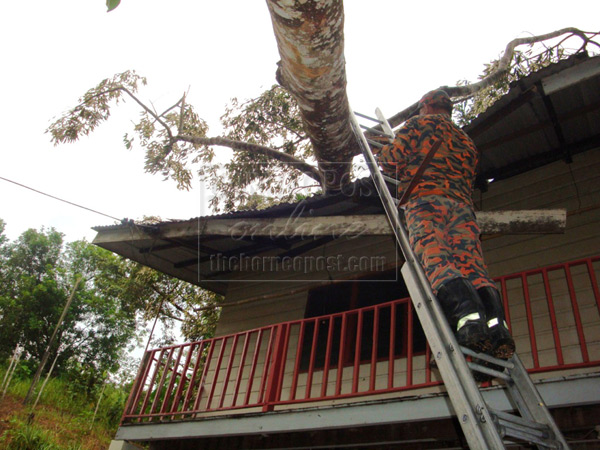 CLOSE CALL FOR COUPLE: Firemen cutting and removing the branches and trunk of the durian tree that fell on Thomas’ house.

SARIKEI: A couple escaped unharmed when a durian tree fell on the roof of their house at Jalan Kim San about 5 km from here around 7pm last Monday.

The durian tree was said to be uprooted by strong winds which also brought down two other trees along the same road.

According to acting District Fire and Rescue Services Station chief, Salim Hussain, they received a call from the houseowner Thomas Lam at 7.03pm and a team of six firemen was summoned.

Their path to the scene of the incident was blocked by two uprooted trees which they had to clear first, Salim said.

“When we arrived at the scene, we noticed the durian tree leaning on the roof of Thomas’ house and because it was dark, we felt it was risky to commence operation.

“We therefore advised Lam and his wife to stay with their relative for the night and promised them we would come back in the morning to cut down the tree,” Salim said.

Yesterday morning, Salim together with his deputy Haron Jenai and nine firemen returned to the scene to commence operation around 9.20am.

They cut down the uprooted durian tree that fell on the couple’s house.

They completed their operation around 12.15 pm yesterday.