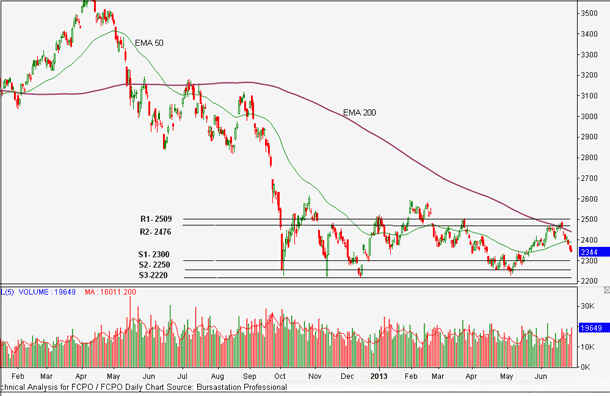 Crude palm oil futures (FCPO) on Bursa Malaysia Derivatives were down throughout the whole week as the futures product was affected by the liquidity crisis in China which may affect the demand from China, one of the major consumers for palm oil products. According to a KL-based trader with a foreign commodities brokerage, most of the global commodities are depressed and moving downwards including palm oil. Moreover, investors chose to liquidate their positions ahead of a key industry report which is the US Department of Agriculture (USDA) report which could show higher supplies of rival oilseed soybean.

The USDA report was also expected to be negative. USDA released its mid-year acreage and stocks report later on Friday where it reported that soybean plantings were a record 77.728 million acres which was up one per cent from last year, but 200,000 acres lower than the average forecast. Soybean futures for autumn-delivered supplies slid nearly two per cent on good crop weather and on spill over pressure from sinking corn. According to an agricultural meteorologist said on Friday, ideal corn and soybean growing weather is expected in early July in the US Midwest, with moderate temperatures and likely occasional showers.

The benchmark FCPO September contract settled RM2,344 per tonne on Friday which was down 95 points from last Friday. The trading range for the week was from RM2,429 to RM2,341.

The demand from top importing countries like European Union countries and China seemed picking up for the past 15 days while Pakistan and India saw a strong growth in its palm oil imports approaching fasting month in July.

The fall in palm oil price were also supported by the strengthening in ringgit against US dollar after ringgit had weakened last week where the high reached 3.2215 (spot market). Stronger ringgit normally makes it more expensive for the refiner side to purchase crude palm oil.

The benchmark September contract fell throughout this week even there was better exports demand but liquidity crisis from China and bearish report from USDA pushed FCPO futures further down.

Violation to the support side of the uptrend channel triggered a lot of technical selling and accompanied with bearish fundamental news, price which accelerated further below to end the week in a negative trend. Such fall forced FCPO futures to go back into the consolidation phase after it was unable to continue its bull run, where the consolidation began since October 2012.

Oriental Pacific Futures (OPF) is a Trading Participant and Clearing Participant of Bursa Malaysia Derivatives. You may reach us at www.opf.com.my Disclaimer: This article is written for general information only. The writers, publishers and OPF will not be held liable for any damage or trading losses that result from the use of this article.