Monday, February 6
You are at:Home»News»Sabah»Animal activist decries inaction on animal cruelty in KK
For the freshest news, join The Borneo Post's Telegram Channel and The Borneo Post on Newswav. 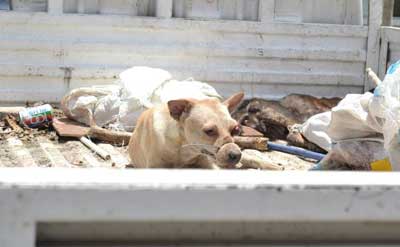 A badly beaten stray dog while another lies dead on the cargo bed of a truck.

KOTA KINABALU: An animal activist has criticised local authorities for their alleged lackadaisical approach in dealing with stray dogs problem and animal cruetly.

Sam Lau pointed out that Section 428 of the Penal Code stipulates that the killing of a dog, an area that should be of concern to the police, may result in jail of not more than two years or a fine or both; whereas acts of willful cruelty towards dogs or other animals, under the jurisdiction of the Department of Veterinary Services (DVS), may result in heavy fines.

“In KK, however, these provisions seem to hold little sway, with the authorities being slow to act or choosing not to act at all,” he said.

“The tragedy of stray animals is a seemingly never-ending and all pervasive problem – a sight familiar to us all in KK.

“The slaughter and brutal maiming of five stray dogs recently in Country Heights Apartments, Penampang,is a case in point and not a sight residents will easily forget,” Lau said.

He claimed that the management of the housing estate had resorted to clubbing the dogs to death after complaints to the local council fell on dead ears.

He said a member of Society for the Prevention of Cruelty to Animals (SPCA) present ordered the release of the one dog that was still alive, but no measures were taken to prosecute.

The perpetrators, using the developer’s lorry to remove the dogs’ bodies, left the scene unquestioned.

“Where is the voice of authority to speak out for animal rights in Sabah? Evidently it is muffled at best or non-existent in the main.”

Lau said that in a similar incident, a recent Trap Neuter and Release (TNR) initiative by SPCA in Taman Nelly Phase 9, Kolombong ended in tragedy.

“Residents sponsoring the neutering of local strays witnessed a red truck passing through the vicinity and meat being distributed to five neutered-and-released street dogs, two of which died soon after ingesting the meat,” he claimed.

“How, despite laws being in place to criminalize the killing of these animals, can they continue to be treated as rubbish to be disposed of rather than sentient beings with the right to life?”

“Perhaps Sabah can take a page from the book of those championing dogs’ rights to life in Selangor. Following the disastrous incident of an elderly woman’s long-time pet being shot by Ipoh City Council, an ensuing outcry from the public, NGOS and Malaysian Animal-Assisted Therapy for the Disabled and Elderly Association (Petpositive), led to a ban on the shooting of dogs in Ipoh.”

Lau said it is high time for more firm action to be taken against brutalising strays in KK.

“Firstly, the ambiguity surrounding prosecutions under Penal Code 428 must be addressed by the relevant parties and penalties dealt more swiftly.

“Secondly, city authorities in KK would do well to engage in dialogue with animal rights and animal protection groups to discuss ways of improving its management of stray dogs in the city.

“Such efforts would ensure that the animals are not only given a chance to live well but also provide the long-term benefits of companionship to the pet lovers who adopt them.

“The cruel killing of dogs is unacceptable if we wish to live in a truly compassionate and caring Sabah.”