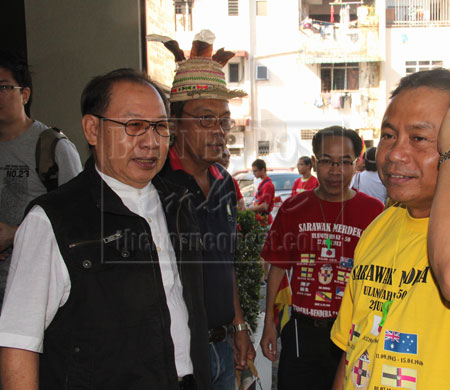 TAKING THE LEAD: Kitingan (left) talking to some participants of the forum in Kuching yesterday.

Saying it was ‘better late than never’, he said the move showed the government recognised the fact that Sarawak is a nation within the Federation of Malaysia.

“(Chief Minister Pehin Sri) Taib Mahmud may have his weaknesses, but he is also doing good in protecting the

He added the state government showed it still had the ‘Sarawak Mind’, and was not letting itself to be taken over by the ‘Malayan Mind’.

Asked what he meant by ‘Malayan Mind’, Kitingan said it referred to an Umno-driven agenda to control Sarawak and Sabah politically so that they could control its resources.

While he was hopeful July 22 would be declared a public holiday, he said the Sarawak government should not let the special ceremony to be staged today (July 22) to commemorate the handing over of the administration by the British Government to Sarawak to be a ‘one-off’ affair.

“We do not want tomorrow’s event to be just a one-off in every 50 years. It should be celebrated every year, and the rakyat

should know the significance of it,” said the Bingkor assemblyman from Sabah, who is also State Reform Party (STAR) Sabah chairman.

On the increasing awareness among Sarawakians on the significance of July 22, he said it was an encouraging sign, but he hoped this historical event would be included in the history subject.

“I think it should be taught in school. Why should we hide the information? I think in the past, the federal government has deliberately denied us this information because it is not even taught in schools, and the general population do not know about it.

“It is consistent with what (a former prime minister) told me, `Don’t teach people what they don’t know’.”

He also expressed his wish that Sarawak would not repeat the mistake of Sabah by allowing Peninsula-based parties to take root and take over the government.

A special pantomime depicting historical events leading to the independence of Sarawak 50 years ago from the British Government and the formation of Malaysia will be staged at the Kuching Waterfront today in conjunction with the 50th anniversary of Sarawak’s Independence through Malaysia.

On July 22, 1963, the last British colonial governor Sir Alexander Waddell left the Astana and boarded a white sampan to cross the Sarawak River to hand over the administration of Sarawak to her own people.