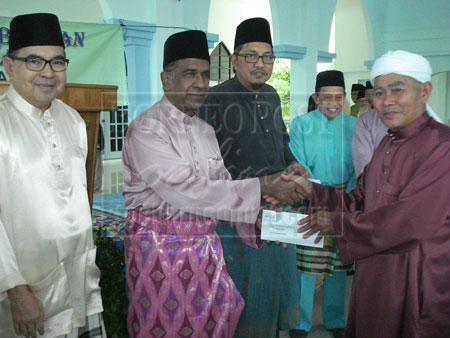 RAYA CHEER: Daud (second left) hands over TBS contributions to appointed tithe collectors for distribution to the poor. With them are Ahmad Lai (left) and Shibli (Daud’s left).

MIRI: Tabung Baitulmal Sarawak (TBS) has been able to help Muslims in need because it is financially sound and properly managed.

Assistant Minister in the Chief Minister’s Department (Islamic Affairs) Datuk Daud Abdul Rahman said TBS got its money from contributions such as zakat (tithe), and it spent about RM2 million annually to help the poor.

“Sarawak Muslims have begun to realise that when they donate to TBS, the money are well

managed and are used to help Muslims in need and for the development and promotion of Islam,” he said at Masjid Istiqamah in Kampung Luak here yesterday.

Daud, who is also TBS chairman, was there to distribute Raya goodies to the poor and hand over contributions to mosques and suraus.

He said TBS managed to build Islamic complexes in Kuching, Sibu and here to the tune of RM100 million each because of its prudent management.

“These complexes are a symbol and pride to the Muslims community. It will help contribute to the economic wellbeing of community.”