Monday, November 28
You are at:Home»News»Sarawak»Kiu’s dian pian ngu has made Sibu famous 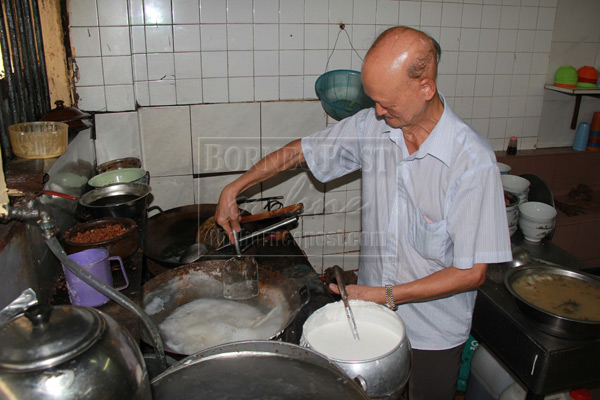 SIBU: Seventy-year-old Kiu Chiong Looi has made Sibu famous in the culinary world of sorts by making and selling dian pian ngu without realising it.

For the past 50 years, Kiu has, without fail, been selling dian pian ngu, a soup dish made from rice flour and other ‘secret’ ingredients.

Even at close inspection dian pian ngu looks like just a simple dish. It is not. First, he has to ground some rice into flour. Then, he pours the flour in thin layer around the wok’s surface.

Once the flour has solidified, he adds in some stock until it is cooked. Before serving, he adds pre-cooked ingredients to the soup such as cuttlefish, fishballs, mushrooms and spring onion for flavour.

A bowl of dian pian ngu can be had for RM3 while a special one with additional ingredient of meat costs RM1 more.

Many people in Sibu grow up having dian pian ngu for lunch, especially students of Methodist Primary School just a street away. It is a dish that anyone in Sibu has savoured and enjoyed.

A loyal customer, Lau Kai Huat, 56, who is also a businessman, said Kiu has set the standard and the tradition of making dian pian ngu in Sarawak. It is safe to say that he is the first person to sell the dish in Sarawak.

“One can also find dian pian ngu in China and other parts of Sarawak. However, the dian pian ngu here is the Sarawak version, which, after about five decades of existence, has become a tradition and a dish on its own, different from that in China. Kiu has made the dish famous. There are maybe others who are also selling it in other parts of Sarawak. And customers will usually pitch their standard against the one concocted here,” said Lau, adding that he has been having it since he was in primary school.

“Now, I occasionally come for it.”

Over the years, Kiu, has without realising it, has turned dian pian ngu into a signature dish for Sibu, alongside kampua and kompia.

It has gained so much fame that it has become something not to be missed by outsiders and tourists coming to Sibu, especially those who have migrated to other places but are coming back for a visit.

A Singapore food programme team even flew in to feature it, raising its fame to an international status.

Kiu learned to prepare the dish from the previous owner at 17 as an apprentice soon after graduating from Junior 3. He has carried on with the business and has been operating at the same venue – a spot between Blacksmith Road and Butterfly Garden – for the past 50 years.

The small business has helped to support his family of six children, two of whom have furthered their tertiary education in Australia and the United Kingdom.

“I believe people like my dish because it is healthy and reasonably priced,” said Kiu, a man of very few words.