Sunday, September 19
You are at:Home»News»Sarawak»Ngau fires tirade at opposition over statement 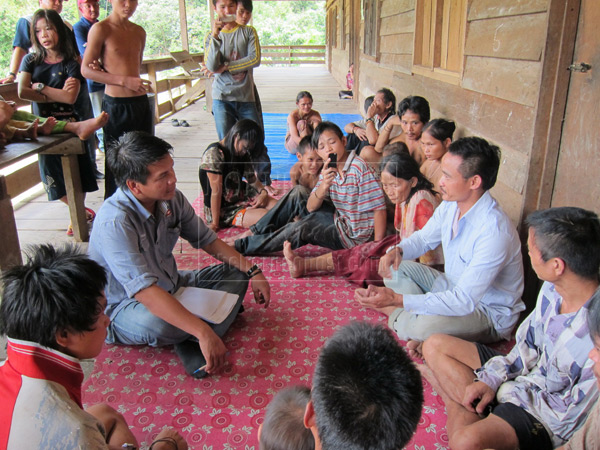 GETTING INFORMATION: Ngau (seated second left) getting details on issues faced by the Penans at Selulong recently.

MIRI: Telang Usan assemblyman Dennis Ngau has refuted the opposition’s accusation that Barisan Nasional (BN) had not brought positive changes to the life of the Penans, especially those living in Ulu Baram, with regards to the recommendations in the National Taskforce Report.

On the contrary, he said, the BN government had since years ago been engaging with the Penans through dialogues or meetings “to make them understand why they must accept development.

“Lots of efforts and numerous programmes have been carried out by various government agencies to address issues highlighted not only by the taskforce committee but also issues brought up to me as their representative.”

He was referring to a statement by Batu Lintang assemblyman See Chow How that Women, Family and Community Development Minister Datuk Rohani Karim did not tell the truth at the 7th Meeting of the Asean Commission on the Promotion and Protection of the Rights of Women and Children in Kuala Lumpur.

“I did not read the taskforce report but I’m sure the government took it seriously and at times may have to adjust to suit the local environment.

“It is a continuous effort and involves many parties including pro-government non-governmental organisations (NGOs) and even private companies operating in the area,” he said yesterday.

Regarding the sexual assault and exploitation of young Penan women and girls highlighted by See, he said even as the people’s representative travelling all over Ulu Baram, Apoh and Tutoh regions where Penans live, he did not receive a single complaint on the matter.

“The Penans that I met and asked even denied such thing occurred. They are not happy that certain quarters are picking up issues on the Penans and unfairly accusing the government of being uncaring towards them.”

The Penans, he said, are thankful to the government and its representatives because they are the ones that really care and provide services needed by them.

He also scoffed at See for saying that the Penans in Middle Baram have to rely solely on a single truck that was purchased and given to them by the Selangor and Penang state governments.

“This is absolutely nonsense and pure lies. It goes to show how naive the opposition is and don’t really know what is happening on the ground.

“They might have got information from one or two of their supporters on the ground.

“To put it sarcastically, what is that single truck compared to the millions of ringgit spent by the government so that all these Penan children are properly educated.

“Penan settlements are scattered all over Baram and quite a distance from one another. How on earth can a single truck provide transport for all Penan children all over Baram, for example those at Ba Balau, Ulu Tutoh and Penan kids of Long Beruang, Ulu Baram?”

On the accusation that no additional effort had been made to improve health service, he explained that it is regularly provided by the Health Department through the flying doctor service.

In addition, he said, the timber companies provide regular free transport for Penans to go to the nearest rural clinics like at Long Bedian, Long Seridan and Long Kevok.

Touching on national registration, he pointed out that most Penans now possess birth certificates and identity cards through the National Registration Department’s regular mobile service.

Regarding pre-school classes, the government, he said, is promoting Kemas kindergarten to every settlement and longhouse but unfortunately certain irresponsible quarters had instigated the rural folks not to accept the kindergartens as they claim that Kemas is a government tool to spread Islamic teaching.

He also said Rohani is very aware on what is happening on the ground because she regularly receives first-hand information both from him and the member of parliament for the area.

“The opposition must stop accusing the government of not doing anything for the Penans. Just highlighting the Penans is not fair to the Kayans, Kelabits, Kenyahs, Sabans and others who equally need government attention.

“I can’t help but conclude that the opposition is only interested and trying to score political mileage by continuously highlighting all issues with the Penan community.”