Wednesday, October 27
You are at:Home»News»Nation»Jamil Khir: Those practising Syiah will be rejected 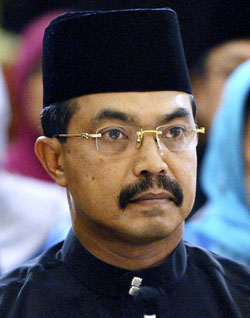 YAN: Those who practise Syiah will be severely dealt with, regardness of status or political ideology, and will not be accepted in the country.

Minister in the Prime Minister’s Department Datuk Seri Jamil Khir Baharom said it was difficult to detect members of the Islamic sect because the group often concealed its identity and lied to avoid detection.

“We do not know of any political leader linked to Syiah. However, if we talk about who is practising the Syiah belief, regardless of the party he is from, he faces rejection in our country.

“Furthermore, we must have strong proof, we cannot arbitrarily accuse anyone (of being Syiah devotees) because they are allowed to lie, it is the tenet they adhere to,” he said after handing over Aidilfitri contributions here yesterday.

He was commenting on a claim in a newspaper that two top leaders of a political party were giving political support to the Syiah movement in the country, which masqueraded as ‘Ahli Sunnah Wal Jamaah’ to dupe the public and the authorities. — Bernama