Friday, December 3
You are at:Home»Business»Ayrault: French gov’t will not discriminate palm oil products 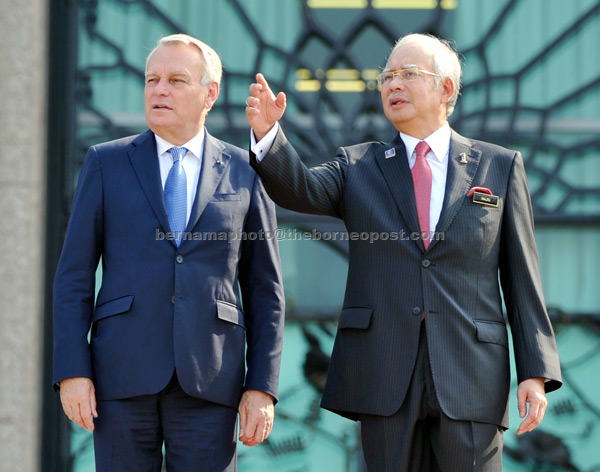 GIVING ASSURANCE: Najib is seen with his French counterpart Ayrault during his official welcoming ceremony at Bangunan Perdana Putra. Ayrault says the French Government will not discriminate palm oil products from other vegetable oils as he understands how these commodities are very important to Malaysia. — Bernama photo

In giving the assurance, Ayrault said although there were some initiatives taken by members of parliament in France to impose a special tax for palm oil, the government did not support their initiatives and this will not come true.

“The palm oil will not be treated differently from other vegetable oils and there will be no discrimination on palm oil,” he told a joint media conference.

Ayrault is on a two-day visit to Malaysia from Sunday.

Ayrault said he discussed the palm oil issue with Prime Minister Datuk Seri Najib Tun Razak and understood how this commodity was very important to Malaysia.

“I know how palm oil is very important to Malaysia, given the number of people who rely on palm oil production for their living, particularly small producers,” he added.

Meanwhile, Najib said the Prime Minister of France has assured him that there will not be any new tax for palm oil and the commodity will be treated ‘pari passu’ (will be treated as the same) as other vegetable oils in France. — Bernama