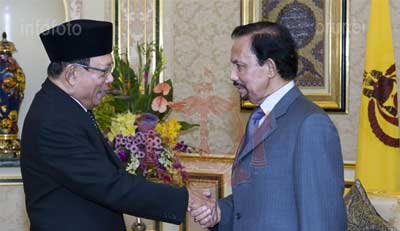 The World Islamic Economic Forum, set to be held in London this year under the invitation of Britain, aims to change the perception of the word ‘Islamic’ in bridging a connection to the non-Muslim business world, Borneo Bulletin reported.

Islamic Finance, which has recently gained strong interest among the western banking and financial sector, will naturally be one of the major focus areas at the forum.

Tun Musa Hitam, Chairman of the World Islamic Economic Forum (WIEF) Foundation, noted yesterday that Muslims happen to be the significant, most deprived people in the world of economic and financial injustices, thus it is the duty of Muslims to help improve this.

Tun Musa Hitam, who is a former Malaysian Deputy Prime Minister under Tun Mahathir Mohammad, was speaking at The Empire Hotel & Country Club during a media interview on behalf of the WIEF.

He was in the Sultanate to extend an invitation to His Majesty the Sultan and Yang Di-Pertuan of Brunei Darussalam to attend the 9th WIEF scheduled to be held in Excel London from October 29 to 31, 2013, under the theme ‘Changing World, New Relationships’ to encapsulate the emergence of new economic linkages between nations across borders, religions and cultures in a fast changing world.

His Majesty has given a positive indication to the invitation. Tun Musa Hitam was accompanied by a representative of British Prime Minister David Cameron to deliver a similar letter of invitation as a host country.

In an interview after meeting the monarch, Tun Musa Hitam highlighted the event this year signifies a great achievement to WIEF as it will for the first time be held in a western country under the invitation of the British people. It is indeed significant as London is one of the leading financial and cultural centres of the world, and the business gateway between the Muslim and non-Muslim world.

The theme states that the world is a fast changing place, where new relationships have emerged out of the various crises besetting the global economy. Old economic models have failed to describe how the world works and underestimated the human propensity to collaborate, rather than compete to survive in this ever turbulent 21st Century. A search for a new framework has already begun. Like never before, partnerships are sprouting across borders, religions and cultures, all in the name of peace and prosperity between nations. Of those partnerships, the most crucial of all is in business and trade, which is bound to shape relations between nations and economies in the near future.

Tun Musa Hitam said since its inception nine years ago, the forum has aimed to act as a bridge between the Muslim and non-Muslim business world, bridging economic gaps in different communities all over the world. It also focuses on the real need of the Islamic world, which, simply put, is ‘ecbnomic needs’.

“Ifyou look at the world demographic you will see that it is the Muslim ummah that are most deprived. Only by economic development and all things connected to this (such as investments, trade, multilateral collaboration in the field business) can we improve ourselves,” he explained.

He noted, WIEF understands that it is crucial to reach out to the non-Muslim business world as part of the global community and in tackling the real needs of the Muslim ummah by reaching out to and collaborating with the world outside the Islamic world.

WIEF welcomes any sector, any community any where in the world that wants to collaborate with them, “That is why, each time we have a forum, we do not question what religion they are practicing as it does not matter.

“WIEF does not touch on religion or spiritualism. We do not touch on politics or ideology, and we are not against them… that can be discussed at other forums. As far as our forum is concerned, we want to focus on the real business of business,” he said.

WIEF is held in alternate order between Malaysia and other countries. The WIEF being held in London this year signifies a milestone and will garner interest among the western world. Next’year, under the invitation of the Dubai authority, the WIEF will play out in Dubai.

“We are different in many ways because we are not top-bottom, but bottom-up: meaning, we recognise the reality on how far we are being left behind.

“We recognise that in order to be big, we must tackle the small and medium first. So, while you might see some of the names that are coming to the forum that may be unfamiliar to you, in between there are also the big names and personalities, whose presence and views will enhance the value of the forum.”

There are very happy in London that we are going there… and Islamic Finance will definitely receive strong focus, he said.

Tun Musa Hitam noted that the 9th WIEF may see a strong participation of 1,500 people, with the smallest participation so far being around 600, when the forum was held in Kuwait. At the time it was faced with facility issues.

WIEF has no problems gaining participation. In fact, the problem is to say “no” to applicants, he told.

Participation is at three levels: The business people, the government (such as ministers) and the highest level being the head of government.

Through the forum, Bruneians will be more aware of the WIEF, especially in view of the strong indication of His Majesty’s attendance to the forum in London. He later expressed hopes the Brunei business community will attend the forum to benefit from this important economic event.

Tun Musa Hitam also disclosed some of the discussions during his brief meeting with His Majesty, which included the possibility of Brunei. hosting some of the WIEF activities.

Aside from the the annual conference, WIEF also holds activities that relate to women, youths, education and general body – such as regional (business) round table.

With youth activities, for example, WIEF gathers 30-40 specially selected youths for a specific purpose, specific issue. With regard to women, WIEF holds the Women Entrepreneur Development; a gathering of around 30 women from anywhere in the world, depending on the region, where they undergo basic entrepreneur development.

“Let me elaborate on the WIEF Women Entrepreneur Development. Anywhere in the world, especially in our Islamic world, we see women taking part in businesses, sitting on-the floor selling wares at the market, and they have been sitting like that in our countries fora long time. Therefore, we are trying to improve their development.

“We have done this very successfully in Kenya; in Surabaya, Kuala Lumpur; and in other parts of the world.

“We gathered about 30 women through application tcy our website. It was very interesting… They got acquainted and we taught them basic skills, including how to set up e-mail and Facebook accounts.”

When he handed out certificates of completion to the participants, they told me how they had already sold items through their newly setup websites, he said.

“In Indonesia, a lady who used to sit and sell wares at the market now receives orders from different parts of the world.”

WIEF receives requests from as far away as Morocco and Russia.

WIEF will, in London, sign an agreement to extend these activities, placing it at a more professional level.