Tuesday, February 7
You are at:Home»News»Sarawak»Golden Bridge catalyst to closer interaction between both parts of city, says Taib
For the freshest news, join The Borneo Post's Telegram Channel and The Borneo Post on Newswav. 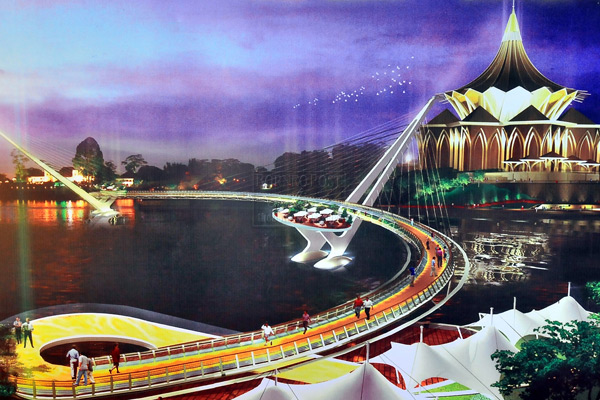 ARTIST’S IMPRESSION: The proposed Golden Bridge to link the northern and southern parts of the city scheduled for completion by end of 2015.

KUCHING: The proposed RM35-million Golden Bridge, when completed, is expected to encourage better interaction between people from the southern and northern parts of Kuching City.

Chief Minister Pehin Sri Abdul Taib Mahmud said the idea behind the bridge is to encourage and foster healthy social integration with the interests of the people at heart.

He said this is because as the city grows, it would be more difficult to maintain a vibrant lifestyle that enables its people to interact with one another in the spirit that Sarawakians are known for.

Speaking at the launch of the project at the new State Legislative Assembly building here yesterday, he said as people get more advanced they would have very little time to socialise, which would not be healthy for the development of a city.

“Because of that, the process of socialisation and mobility must be encouraged in order to strengthen the links that can help Kuching to grow and have its own soul among the people,” he said.

He added it is his hope to see the bridge act as a modern link between the two sides of Sarawak River, explaining that the pedestrian bridge will provide an alternate route for people from the north who want to shop or do business in the south or people from the south to come to the north if they seek tranquillity.

“In developing our city, we want to establish a legacy square with nice shop houses in the north while in the south, it will be established with recreational facilities so people from the south who wish to relax and enjoy the quietness and fresh air over this side can easily do so by just crossing the bridge,” he said.

On top of that, he said the bridge will also signify the successes that Sarawak has achieved thus far.

In this respect, he congratulated Sarawak Economic Development Corporation (SEDC) for being appointed as the implementing agency, and taking up the challenge with confidence and commitment.

“I hope that SEDC will not stop at that but will continue to play an important role in the development of Kuching City,” he said.

The Golden Bridge is 400 metres long and 3.25 metres wide with gentle gradients to accommodate pedestrians, buggies and the disabled.

Meanwhile, SEDC chairman Datuk Talip Zulpilip, who was also present at the launching, said it was an honour for the chief minister to publicly announce the contribution made by the agency towards development in the state.

The launch of the proposed Golden Bridge (named after the 50th golden anniversary of Sarawak’s Independence) yesterday also saw the signing of a memorandum of understanding between PPES Works (Sarawak) Sdn Bhd and Naim Land Sdn Bhd as project contractor.