Saturday, January 28
You are at:Home»News»Sarawak»Forced to bath in murky water
For the freshest news, join The Borneo Post's Telegram Channel and The Borneo Post on Newswav. 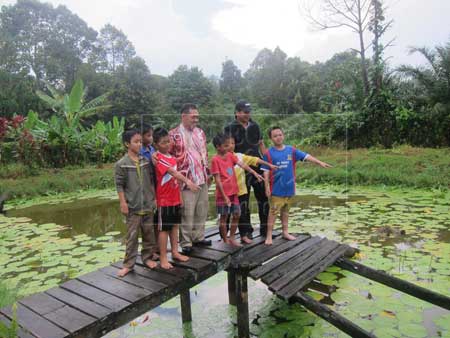 UNHYGIENIC: Pupils of SK Puyut with Ngau (right) and Jackson Meli, a former teacher of the school, showing the pond where they take their bath.

KUCHING: Students of a primary school near Marudi,SK Puyut, have to take their baths in a nearby pond because water supply to the area is unreliable and most days the taps are dry.

Telang Usan assemblyman Dennis Ngau made this shocking discovery when he visited the school which is within his constituency recently.

He told The Borneo Post that the students complained that they suffer from rashes after using the pond water for bathing.

The assemblyman calls on the relevant authorities to ensure adequate water supply to the school so that the pupils need not have to use the pond for bathing.

Ngau added that he also found about 30 of the 46 primary schools in his area did not have proper facilities for the pupils and teachers.

“SK Kuala Tutoh and SK Ubung Imang are unsafe as the buildings are in dilapidated conditions.”

He said most of these primary schools, including teachers’ quarters, were built by the villagers on gotong-royong basis, and in some cases the buildings they put up were no better than chicken coops.

However, Ngau noted that the secondary schools were in much better conditions than the primary schools.

The problem of poor facilities and unsafe buildings in rural schools is not confined to Telang Usan as Hulu Rajang MP Wilson Ugak Kumbong when contacted about schools in his vast remote constituency described the condition of many the schools there as ‘daif’ (pathetic).

From his visits to his constituency, Ugak estimated that about 30 schools in Hulu Rajang needed urgent upgrading.

“These schools are in dire straits. Please highlight this issue so that these schools could be upgraded soonest possible,” said Ugak.

A school in Punan Bah, in Hulu Rajang, was highlighted by The Borneo Post recently for its overcrowded boarding facilities, but it had since been upgraded.

Dennis and Ugak are happy with Deputy Minister of Education Datuk Mary Yap Kain Chin’s statement published on Friday that her ministry planned to upgrade rural schools nationwide under the Malaysian Education Development Plan for 2013 to 2015.

She said there were three waves under the development plan. The first wave would focus on upgrading rural schools.

The news was also welcomed by Sarawak Teachers Union (STU) president Jisin Nyud. He said the lack of facilities and accessibility issues in the rural areas were due mainly to financial and geographical factors.

“The teachers and parents would be very happy if the upgrading of schools, especially in the rural areas, could be carried out as soon as planned.

“STU hopes that Yap, who understands well the conditions of schools in Sarawak and Sabah, can help to speed up the process,” said Jisin.

He added that about 60 per cent of schools in the state were located in the rural and interior region.

Jisin’s predecessor William Ghani Bina said most rural schools in the state needed urgent upgrading, especially classrooms, as most of them were not conducive for pupils to study.