Wednesday, October 27
You are at:Home»Features»Orangutans come to the ground 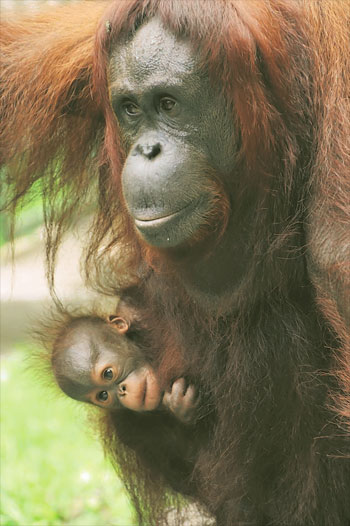 NOT ONLY ON TREES: All sexes and age groups of orangutans will spend time on the ground.

SWINGING TIME: Orangutans were previously thought to spend most of their times in trees.

IT has always been thought that orangutans spend most of their time in trees lying around in afternoon nests, snoozing and occasionally, slowly and elegantly, moving through the canopy to find fruits or other morsels to eat and enjoy.

The observer at any of the wildlife refuges, where these great beasts come to feed at platforms, note they don’t seem to be in any hurry and will, in slow motion drop and reach for a rambutan like a Victorian lady at a formal dinner during the colonial era in Kuching.

Slowly and fluidly they climb up the tree to daintily eat their fruit and seemingly disappear and meld into the forest like a wisp of a ghost. Just about everybody has agreed these forest denizens spend most of their time in the trees.

However, researchers who spend a lot of time with these Bornean apes have noticed that they occasionally come down to the ground and meander around ripping apart a termite nest, picking up fallen fruit, invading oil palm estates to attack the developing nut and wandering around Acacia trees commonly used in planted forests.

Most reports have stated that it is mainly the flanged male who dares to leave the safety and comfort of the trees to explore these possible fruit sources.

Over on the island of Sumatra, those who have spent time in both orangutan areas know that those apes rarely come down to the ground. One theory is that the volcanic soil is much more fertile than the soil in Borneo so there is plenty to eat in the branches.

They have no reason to stroll among the trees. However, the most prevailing theory states that the Sumatran Tiger will have an orangutan meal and it is much safer to stay in the trees.

A group of scientists from the Mulawarman University in Kalimantan and from North America decided to try and find out if the Borneo orangutans did spend as much time on the ground as thought and, if so, why.

The area they selected was the Whea Forest in northeastern, Kalimantan. The forest is home to one of the three Bornean subspecies of orangutan known as the Morio (Pongo pygmaeus morio).

The conservation area is one of the harshest environments for the orangutans to live because of poor soil conditions. The apes have adapted to this severe environment by being smaller than their counterparts, having much larger jaws to crush harder nuts because of the lack of fleshy fruits and a shorter time period between births.

Between March and October 2012, 68 camera traps were set up along old logging roads, trails and at one mineral (sepan) lick. Ten more were added in May for a total of 78 cameras set up at 43 stations.

All cameras were placed on trees 50 centimetres above the ground, rain protected and with a bed of leaves on the ground to protect them from mud splash. They were checked and data retrieved in the middle of May, early July and October. A total of 2,149 images were recorded of Morio at 28 of the 43 stations.

At first, some researchers thought orangutans climbed down to the ground when there was a gap in the canopy. They would then amble on the ground and climb back up to continue their journey when the canopy reconnected with other trees.

However, these researchers found that even in areas of continuous canopy, they still spent time meandering on the forest floor. Furthermore, they found that orangutans travelled on the ground even when the canopy was closed.

Another idea postulated was that only large males with huge black cheeks (flanges) occasionally made forays. However, the new evidence collected showed that all sexes and age groups occupy the landscape. Mothers with babies, juvenile males and female as well as the flanged males were all recorded on the ground.

The results of this study have enormous implications for conservation. Where it was previously thought only a tall treed environment could support an orangutan population, now thousands of acres of land previously degraded by humans can be added to orangutan protected areas to supplement the old growth areas.

Land deemed no longer suitable for oil palm or ravaged by timber exploitation can be replanted, protected and turned over to orangutan preservation agencies.

It also showed that oil palm plantations planted adjacent to orangutan conservation areas are likely to suffer considerable damage as it has now been shown that orangutans spend much more time on the ground than previously thought.

Therefore, plans for these estates should be abandoned because the orangutans will walk over and enjoy the young developing fruits removing any profit potential.

The study also does not give license to timber companies to cut down old growth forest with the excuse that orangutans can live on the ground.

Rather, it shows that old growth timber combined with formerly degraded areas can enhance and further protect this critically endangered species.