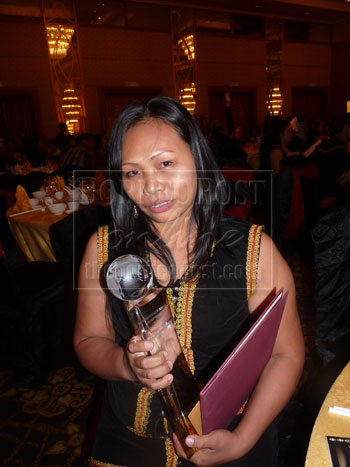 Wailin and her winnings.

KOTA KINABALU: Wailin Ransidin Sambandor, the winner of the inaugural Kadazandusun Literary Award recently, hopes to use her writing skills to save her mother tongue.

Sharing her thoughts with the Borneo Post yesterday, Wailin, who went home with RM5,000 cash prize and a trophy for her winning entry ‘Ginoris Miagal Kinabalu’ (which means As strong as Kinabalu) during the award presentation ceremony a day earlier said that she was seeing that there were now less people speaking in Dusun.

“Many parents of Dusun heritage are speaking to their children in a language other than their own mother tongue. I would say that the percentage of Dusun parents who are doing this is 90 per cent,” she said.

She added that if this was allowed to continue, the Dusun Language would soon be extinct.

“To preserve a language, including the Dusun Language, it needs to be spoken and used. If we cease to use them, then we’re guilty of shoving our own mother tongue towards extinction…and when that happens, we have no one else to blame but ourselves,” she added.

Realising that part of the reason languages such as Dusun or Kadazan were becoming less popular with the young was due to the lack of resources in the form of books and journals, Wailin has set her sight on writing more books in the years to come.

“There is a lack of resources in both language. I want to help in this respect by writing more reading materials for the enjoyment of the people,” she said.

Wailin added that she was an avid reader and enjoyed reading Malay novels since her command in the English Language was not as good.

“I read and I write — these are my two hobbies. I have enjoyed writing since I was in school, and now, I am 35, and I still enjoy it,” she said.

Prior to winning the competition, Wailin said that she used to submit short stories to the Kadazandusun section of the Radio Televisyen Malaysia (RTM).

But that particular segment in the section was discontinued and she didn’t have any other avenues to send her stories to.

“It is a good thing that the Kadazandusun Literary Award came up. Finally, there was a channel for hobbyist writers such as myself to send our stories to,” she said.

She spent four months writing the story — jotting down ideas whenever they came up. And finally, she submitted her finished work to Rita Lasimbang of the Kadazandusun Language Foundation for the latter’s perusal.

“That wasn’t the end of it. The work still needed a lot of editing,” she recalled.

But eventually, her story, which was about ‘Tuniah’, a young girl who has lost her mother and was left at the mercy of her elder sister and other siblings when their father decided to leave them behind at the kampung to work in the city, was finally completed.

“It is a story of how one girl persevered and continued to work hard despite all the challenges she faced. It is about living in the village, about working as a farmer, and about surviving without an education as well as about living in a squatter. In the end, she’s left to carry the burden of caring for her sick and old father.”

“In a way, I am telling about the experience my people have to go through as well as my own story,” she further said.

Wailin, who is also an unemployed housewife, couldn’t believe her luck when her name was announced as the winner of the first inaugural Kadazandusun Literary Award.

“There were other writers who have already published their own work in the competition. They were more accomplished, so I was really surprised,” she said.

All that is about to change though.

By winning the major prize in the award, her winning entry will soon be published into a book and she will join the ranks of other Kadazandusun writers.

“It is a blissful thought — to have ones own first book published…I want to write more in the future.”