Sunday, May 22
You are at:Home»News»Sarawak»‘Cultural heritage law can be extended to marine sites’ 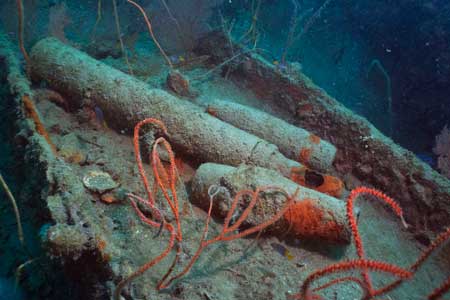 UNDERWATER ARTIFACTS: Artillery shells sit on the deck of the Japanese WWII ship Katori Maru. They have been undisturbed for more than 60 years. Unfortunately, other artifacts from the ship and the Hiyoshi Maru have already been plundered by divers.— Photo by Ernest Teo/Premier Marine & Scuba Centre

He said the present legislation was meant to protect historical sites in the state, but it is more for land-based ones.

“Cross-governmental agency collaborative effort is needed to extend legislative protection for the state’s historical sites to include marine sites.

“The Sarawak Cultural Heritage Ordinance 1993 is more for land-based sites,” he told The Borneo Post when contacted on Saturday.

He said this when commenting on The Borneo Post’s front-page report on Saturday that highlighted the dire threat faced by WWII Japanese shipwrecks off the coast of Santubong here. The sunken Japanese ships Katori Maru and Hiyoshi Maru had been stripped of artifacts by divers over the years with impunity.

Scuba instructor Ernest Teo wailed that aside from destroying the historical value of these sites, the removal of the artifacts would inflict significant negative impacts on the burgeoning underwater tourism industry in the state.

Citing the Hiyoshi Maru as an example, Teo, who has been organising diving trips to the wrecks for locals and tourists for the past nine years, said there used to be a lot of things there that could identify it as a Japanese ship, but not anymore.

“If you go there today, you can’t identify anything at all. I have heard (certain people) say they have hundreds of sake (traditional Japanese wine) bottles at home, as well as other items, like the propeller and so on.”

He said there is in fact another shipwreck – a Japanese WWII destroyer called Sagiri. It is relatively untouched as it is less accessible compared to the other two ships. Getting to Sagiri requires a higher level diving skills and experience.

Ipoi urged the public to refrain from removing items from the wrecks in order to preserve the historical significance and tourism attraction of the sites. He said they were considered historical sites.

“By right, these sites should not be disturbed. The relevant authorities will decide how best to protect them,”he said, adding that they would also look into tightening enforcement, amongst other matters.economic equity in the corporate sector.

“The government heard the cries for help from the Bumiputeras regarding their level of participation in socio-economic development programmes,” said Najib.