Sunday, September 25
You are at:Home»Features»ALICE awakes from slumber land 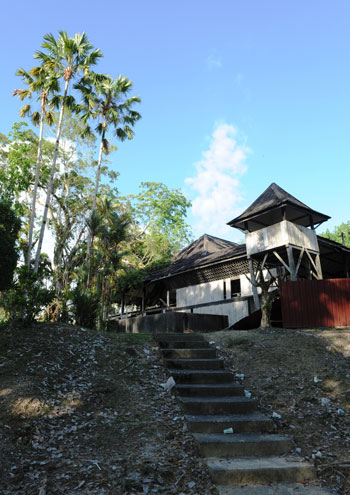 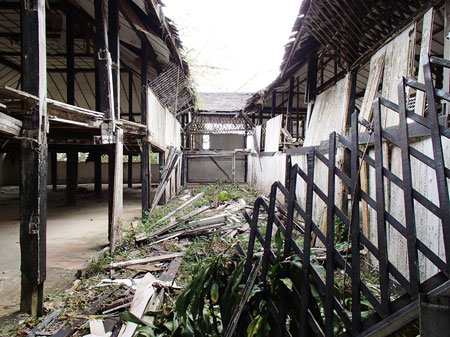 FALLING APART: Bits and pieces of Fort Alice falling off the original frame.

WHILE Alice in Wonderland by Lewis Caroll tells of a fantasy-like world, Fort Alice, built by Charles Brooke, the second White Rajah, also has her own stories to tell.

Over 100 years old, the grand dame of architecture is a fascinating melting pot of different cultures.

Back in 1864 during her heyday, Fort Alice was the centre of Simanggang town, bringing life to the surrounding jungles and areas around the riverbank. She was built after Fort James of the Skrang settlement, constructed in 1849, was frequently flooded and a new settlement was sought.

Charles Brooke decided to move the Skrang settlement downstream and Fort Alice was subsequently built there. The settlement area was then known as Simanggang.

Fort Alice looks like a two-storey wooden bungalow but having been abandoned for many years, she has lost her lustre and become a forgotten relic, her weather-battered timber infested by termites and rotting away.

According to architect Mike Boon, consultant for the Fort Alice restoration project, the wooden facade is not what it seems as historians have dug and unearthed ample evidence, pointing to the Fort being a wooden structure on stilts which was later walled in as it passed through different hands.

Restoration work started on May 28 this year with a Miring ceremony, a traditional Iban ritual, seeking deitified blessings for success of the project, and is expected to finish in 2014.

The entire Fort which has been dismantled, will be rebuilt according to her original design. The plan is to restore the Fort to her former glory.

As Fort Alice is a historically significant building in Sri Aman, it is only right that the local community have a hand in the restoration process.

When ready, the Fort will serve as the platform to promote the preservation of historical places in the Division. The endeavour will involve six local school teachers as facilitators and over 30 students from Primary Five to Form Four.

The students had been brought on site to see for themselves the dismantling process. Hopefully, the experience will spur them to form a voluntary conservation group.

Fort Alice will be turned into a community heritage museum after restoration and the students can enlighten visitors on the history of the Fort by acting as voluntary tour guides.

“The whole idea of basic conservation is to prolong the lifespan of the building. Though I was appointed 10 years ago, I’m lucky the project did not start back then because there would have been many mistakes made since information on the background of the Fort has surfaced only now,” Boon explained.

During that time, he met a University of Melbourne PhD candidate, John Ting, who was researching the Fort, and they shared their findings.

It was not until recently that Boon found a photo of Fort Alice, taken by Alexander Hill Gray, dating back to 1875, and kept in Stonyhurst College, UK. It’s the earliest known photo of the Fort.

From the photo, the Fort looks like a big Malay house with a few rooms on the main floor held up by stilts. The original form of the Fort is a two-storey building with the area within the perimetre of stilts walled up at later stage.

It was only after a close study of the photo that Fort Alice could be restored to its earliest known form. 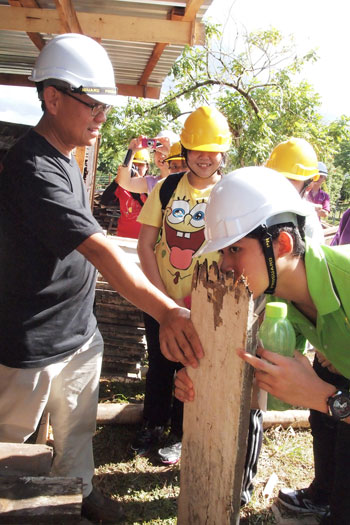 SNIFF TEST: One of the students taking a sniff of wet rot timber.

One notable peculiarity is that the newer materials used for the restoration seemed to deteriorate faster than the original ones.

Boon said the old parts remained intact while the new parts dropped off, revealing the whole structural design and system which had laid hidden this past century.

“With that photo and a few others, we now have a better picture of how Fort Alice really looked like and how it was used before.

“The photos also tell us how to conserve the building and recreate the interior rooms. All the restoration work is based on photograhic evidence, literature and written documents.”

He pointed out that gathering information was slow and painstaking because a lot of it could only be sourced from abroad despite the Fort being in Sarawak.

Most of the information is found at Oxford University and Cornell University, some in Australia and some in private collections.

A big part of the restoration involved dismantling the structure and coding each piece of timber which was then assessed to determine the extent of damage such as through wet rot. At this stage of restoration, the claim that belian wood is rot-resistant has been disproved. Like all wood, belian has to be protected from the elements.

“For example, the belian columns planted in the ground were rotting away with very little still intact. If we didn’t dig them out, it was only a matter of time before they collapsed. By dismantling them, we were also able to study the traditional carpentry used,” Boon noted.

Like Lewis Carol’s Alice who fell down the rabbit hole and found herself in a hallway of rooms with locked doors and a key to a door too small to fit her, Charles Brooke’s Alice has her own secrets as well.

For one, construction the Fort showed that the different races in the state could unite and create something extraordinary. It took the knowledge and skills of three races — Iban, Chinese and Malay – to build Fort Alice.

The columns were planted Iban-style, the joinery techniques came from southern China while the roof was typical Malay. Though they all speak different languages, their skills came together to give birth to Fort Alice — so much so that their collective efforts were duly recognised when representatives of the three races were invited by the Brooke government to plant the first column of the timber Astana in Simanggang in 1931. This Astana has since been demolished.

“It was not until last month that another local historian brought to our attention that in 1931, it was mentioned in the Sarawak Gazette that when a timber Astana was planned for Simanggang, the first column was planted by an Iban and three Malays in recognition of the craftmanships of their forefathers. The second column was planted by a Chinese tauke (businessman) in recognition of his efforts to develop Simanggang,” Boon revealed.

The timber of Fort Alice have been taken apart and stacked away. The still useable pieces are kept while the rotten and termite-invested ones removed. The replacement of unuseable timber was funded by the state government.

“The public can witness the rebirth of Fort Alice from the ground up, starting next month — bit by bit until it fully stands in its former glory,” he enthused. 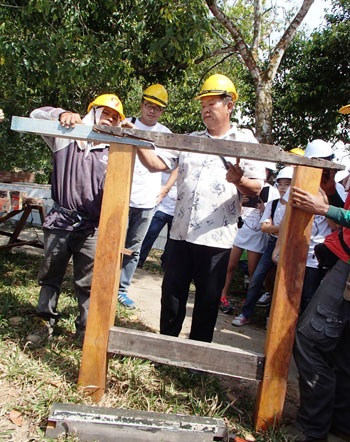 HANDS-ON: Master carpenter Ting showing how the timber frame of Fort Alice will be reconstructed.

It was emotional experience witnessing the glorious structure being reduced to a pile of wood and many tears were shed. But it has to be done and with a dedicated team of builders, the Fort will soon rise from the rubble and continue to exist as a hertiage for future generations of Sarawakians.

For the reconstruction, traditional carpentry and belian wood are used with all details recorded and scrutinised to ensure the design’s closeness to the original.

“We have found a retired 50-something carpenter Ting Nik Sing who will bring his son and a team of Chinese, Malay and Iban workers to do the job. We have interviewed Ting and he understands what we want. He’s very experienced in the traditional joineries used. We believe we are in good hands.

“We are also reconstructing a couple of adzes, traditionally used by locals to curve timber and hollow out logs to make boats. We will use them to recreate the wood finishing. If we use machines, the finishing will look very industrial and manufactured, bereft of any distinctive marks that will only stand out if the construction is hand-worked.”

As a building requirement, the contractor has employed conservators from Penang to help document site process. The conservators will be on site full time to record all the timber used and the proceedings will be stored as archive materials to help researchers on Fort Alice.

Boon said very basic tools would be used to recreate the joineries  — mortise and tenon secured with a dowel like in those days  when nails, being an expensive commodity, were used sparingly.

Nails of different sizes and lengths, found to hold the roof rafters of the Fort together, have been sent to Australia to determine their make. And it has been confirmed they were hand-forged in the mid and late 19th Century.

As much as the wish is to do everything the traditional way, one item has to be compromised — belian shingles. It’s neither practical nor sustainable to reproduce hand-split shingles as the wood used today is not old or seasoned enough and the wood grain is not refined. Thus, mechanically-made shingles are used instead.

A metal underlay will also be built so that should it leak, the rain water will not percolate into the building.

The local communities should be a part of re-making history because such an opportunity is hard to come by. The project is important because various expertise has been called upon to work on Fort Alice — Boon’s experience with the Old Court House, Kuching, Square Tower and Fort Margherita and the tapping into overseas resources via John Ting, now a research historian.

“That’s why we are starting a community engagement called Reminiscing Forgotten Treasure — Simanggang. In this programme, we will be working with local historian Goh Kaw Sze on a series of workshops to instill knowledge and increase awareness of heritage conservation,” Boon said.

All the processes and procedures on the work done on Fort Alice are recorded on the blogs friendofalice@blogspot.com and johntingarchitech.blogspot.com.

The efforts put in over the years will bear fruit and etched into a piece of history that transcends time and will be talked about in centuries to come — Fort Alice. 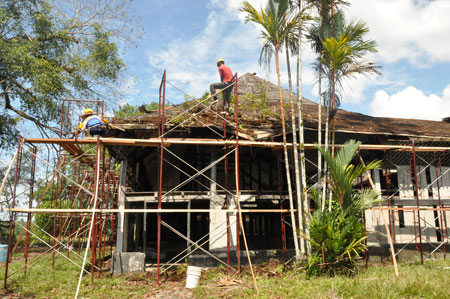 restoration: Workers on scaffolding on Fort Alice dismantling the roof.