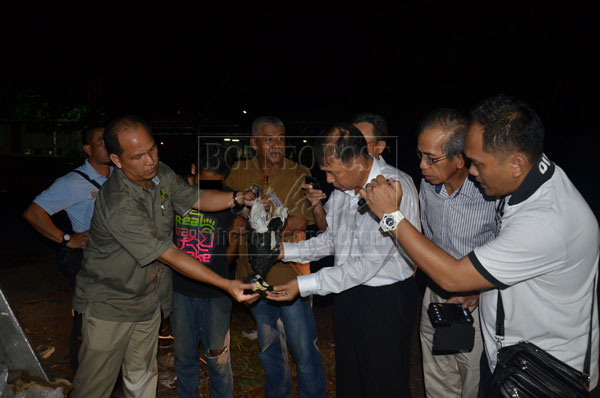 SAD END: Ting (third right) and others having a closer look at Faridah. The prime suspect killer is at third left. — Photo by Cecilia Sman

MIRI: The three men suspected of poaching hornbills, a totally protected bird in the state, at Piasau Garden here on Tuesday were arrested by police yesterday evening.

Although their arrest assuaged the anger and pain of people here, their prayers and hope that the captured bird affectionately named Faridah by frequent visitors to the park would be found alive were dashed, when the suspected thieves confessed it died on the day they caught it.

They led the police to recover the carcass of the bird from the rubbish bulk bin at Jalan Datuk Edward Jeli in Piasau.

LIFE-LONG PARTNERS: Jimmy (left) and Faridah during happy times together in a recent photograph by Jool Othman of MNS.

A distressed Ting said, “This should not have happened, we are trying hard to protect these birds and they hunted them at Piasau Garden. We appeal to the public not to kill or hunt the totally protected wildlife to prevent their extinction,” he said.

Ting said in memory of Faridah the society would organise the 5th Hornbill Walk at 2pm Sunday at the camp.

He urged the public to support the walk and called on the government to gazette the camp as permanent nature park for the conservation of the hornbills and wildlife. 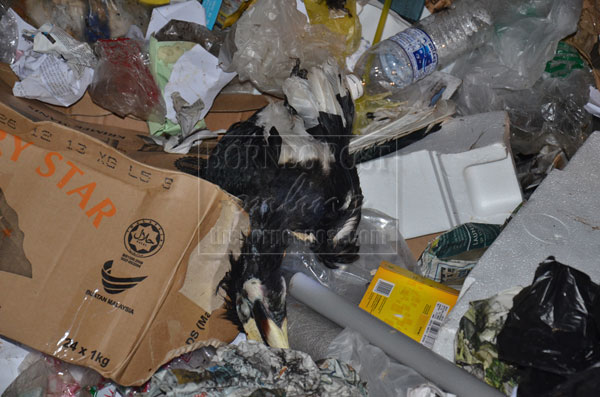 TRAGIC END: Carcass of Faridah recovered from among the rubbish in the bulk bin.

A Sarawak Forestry Corporation spokesperson who was also present when the dead bird was recovered said the suspects would be placed under police custody until investigation had been completed.

The IP (investigation papers) will be sent to the State Attorney General for further action and the case is punishable under the Wild Life Protection Ordinance (1998),” a spokesman told reporters.

Hornbills are totally protected under Ordinance and the penalties for keeping one as a pet, killing, hunting, capturing, selling, trading or disturbing them, or possessing any recognisable parts of these birds are severe – a RM25,000 fine and three years’ imprisonment.

Musa Musbah, the honorary wildlife ranger of the Sarawak Forestry Corporation (SFC) and one of the onlookers on the day of the incident at Piasau Garden, said the death of Faridah would not be in vain.

He noted the bird’s capture by poachers had stirred up interest on the hornbills and birds in Piasau Garden among the public here and raised awareness of the need to protect the state’s wildlife.

Hornbills have lifelong mates and Faridah’s mate Jimmy has been missing since she was captured.

The pair of hornbills played a big role in maintaining the population of the birds in the park having produced about 56 offspring.

Previous ArticlePrevention of Crime Act to be extended to Sarawak, Sabah if amended
Next Article Brunei lauded for early completion of ASCC blueprint