Saturday, December 3
You are at:Home»News»Sarawak»Jimmy finds new love who may give him new off spring 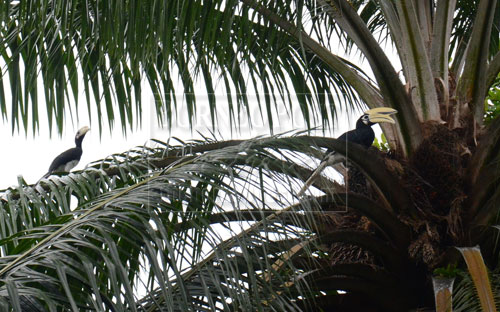 MIRI: Mirians, particularly nature lovers, yesterday had another good news on the totally protected hornbills at Piasau Camp as Jimmy, Faridah’s widower, now has another female hornbill coming into his life.

They were spotted courting each other about 5pm yesterday in the camp by the Borneo Post reporter and a few others who had earlier joined the 5th Hornbill Walk held in memory of Faridah who was found dead on Sept 26 after being poached and brutally killed on Sept 24.

“It is unusual for hornbills; normally they are partners for life. But it does happen and Jimmy is in survival mode. He was seen very sad for about two days when Faridah was hunted by poachers at Piasau Garden on Sept 24 and found dead on Sept 26.

“Probably, Jimmy also reads the newspaper including The Borneo Post seeing that the government has decided to gazette Piasau Camp as a nature reserve,” said Musa Musbah in a joking but happy mood when contacted by The Borneo Post.

Earlier last week, Musa said Jimmy might die of hunger due to sadness over the loss of Faridah.

However, with the turn of events, Musa, Sarawak Forestry honorary ranger and chairman of the Malaysian Nature Society Miri Chapter, said Jimmy’s new partner, who had already been named Juliet (a name famous in Shakespeare’s book – Romeo and Juliet) could be fertile in a few days.

“They have been seen surveying Faridah’s old nesting area in the past few days and in no time Juliet will be producing babies in the camp, good news for the survival of Jimmy’s family,” revealed Musa, who is also pro tem vice-chairman of the Piasau Camp Nature Park Society (PCNPS).

In view of this, he urged Mirians to cooperate in safeguarding the area in support of the government’s decision to make the camp a nature reserve by year end.

He also called for more financial sponsorship to build more artificial nests to encourage more hornbills and other birds to come and make the matured forest in the camp their home.

Musa said MNS Miri Chapter planned to set up about 20 artificial nests at the camp soon.